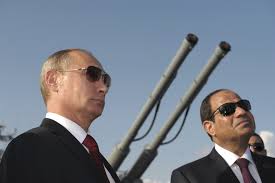 Russia’s intervention in Syria will curtail the spread of terrorism and help deal a fatal blow to Daesh in the war-torn country, Egypt’s Foreign Minister Sameh Shoukry has said.

“Russia’s entrance, given its potential and capabilities, is something we see is going to have an effect on limiting terrorism in Syria and eradicating it,” Shoukry said in a televised interview.