You are here: Home / MidEastGulf / Bush: More troops in Iraq ‘may well be needed’ 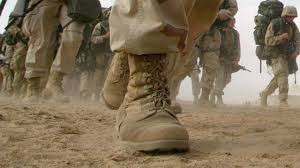 Jeb Bush said more soldiers and marines “may well be needed” in Iraq as he laid out a muscular approach to defeating the Islamic State Tuesday night, calling for embedding troops with Iraqi forces as he sought to lay the blame for the terrorist group’s emergence on President Barack Obama and his former Secretary of State Hillary Clinton.

The Iraq war has bedeviled his campaign, but Bush sought to turn the tables, blaming Clinton and the Obama administration for allowing the Islamic State to grow by pulling out troops and leaving Iraq in a “blind haste.”

“They believe in soft power,” Bush said. “I don’t have a problem with soft power, as long as there is hard power behind it.”

At the Ronald Reagan Presidential Library, Bush laid out a more detailed plan for fighting the terrorist group than any of his Republican presidential rivals. But his speech carried risks, with Clinton’s campaign calling it a “bold attempt to rewrite history and reassign responsibility.” And he called for stepped up military involvement in Iraq and in Syria, including air strikes and enforcing a no-fly zone.

Bush said the U.S. does not need a “major commitment of American combat forces” in Iraq. But he said more than the 3,500 soldiers and marines now deployed there “may well be needed” and that the U.S. should give its forces “a greater range of action,” including embedding with Iraqi units.

“We do need to convey that we are serious, that we are determined to help local forces take back their country,” he said. “Our unrivaled warfighters know that it is simply not enough to dispense advice and training to local forces, then send them on their way and hope for the best.”

In Syria, Bush called for pulling “moderates” together and expanding and improving the recruitment and training of Syrian forces fighting the Islamic States: “When a five hundred million dollar program gets you 54 recruits, you know the plan’s not working out,” he said.

He also called for establishing safe zones in Syria — though he did not say how — and called for declaring a no-fly zone in Syria to cut off Syrian leader Bashar al-Assad and counter Iranian influence — a move that would require a major increase in U.S. air operations.

Bush said his doctrine would require “military strength” and he promised “the day that I become president will be the day that we turn this around and begin rebuilding the armed forces of the United States of America.”

Democrats panned the speech before Bush took to the stage, calling it an echo of his brother’s foreign policy doctrine.

“To boot, 19 – yes, 19 – out of 21 of the foreign policy advisors on Jeb’s campaign are from his brother’s and father’s administration,” noted Eric Walker, a spokesman with the Democratic National Committee.

Bush, who has insisted he will be his “own man,” said after a week of stumbles earlier this year, that he wouldn’t back the invasion of Iraq knowing now that the intelligence was faulty.

He said Tuesday that “no leader or policymaker involved will claim to have gotten everything right in the region, Iraq especially.” But he accused Obama and Clinton of leaving the country unstable: “Rushing away from danger can be every bit as unwise as rushing into danger, and the costs have been grievous,” he said.