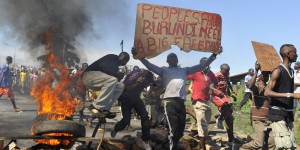 Burundian men take part in a protest against the president’s bid to cling to power for a third term in Musaga, outskirts of Bujumbura, on April 28, 2015. At least five people have died since clashes broke out on April 26 after the ruling CNDD-FDD party, which has been accused of intimidating opponents, designated President Pierre Nkurunziza its candidate in the June 26 presidential election. On April 28, a spokesman for the President Nkurunziza said the President “won’t back down.” AFP PHOTO / SIMON MAINA (Photo credit should read SIMON MAINA/AFP/Getty Images)

By a simple definition, negotiation is getting others to give you what you want, by giving them what they want; put that in the context of Burundi’s ongoing peace talks and ask, who is giving what to whom and in return for what?

You will realize there’s a problem.

It is obvious that for peace to return in Burundi, first, the negotiations must yield; in other words, one party should give away something (concession) but also take something from the given party (compromise).

But who are the actors in Burundi’s political dispute and what are their respective demands? Before the concessions and compromises, the mediators of these negotiations need to define the aggressor and the aggressed.

I watched Uganda’s Minister of Defense Dr. Crispus Kiyonga on television last night, his country is playing mediator; he was talking about the talks and how they must yield.

Unfortunately, from his address, one couldn’t easily tell who is who in these negotiations or what their demands are, for that matter. Blame it on the press’ failure to define the actors?

Most of the news reports have so far been nothing but generic in defining the actors as ‘talks between the government and opposition groups.’ This is not good enough a premise for talks. In South Sudan, we had Salva Kiir vs Riek Machar.

For clear cut negotiations, the aggressor and aggressed must be known. In Burundi’s case, it is tricky. Can Pierre Nkurunziza be referred to as the aggressed party in this case? To do that, one must assume that his government is legitimately holding power and that the ‘opposition groups’ are trying to forcefully taking this power.

Yet according to the opposition rhetoric, Nkurunziza is an imposter holding state power illegally, this after he abrogated the republic’s constitution to obtain an illegal third term in office.

But going by the opposition argument would mean that those ‘fighting to liberate the Burundian constitution’ from its ‘kidnappers’ are the legitimate party.

However, such an approach would hit a dead end, therefore, for convenience and perhaps better results, Nkurunziza’s government has to be seen as the ‘aggressed’ and the opposition groups as the ‘aggressors.’

So we need a room with three tables then, that for the aggressed, aggressor and mediator plus one more, that of observers. Is that it then? Not quite.

There’s a problem regarding Burundi’s opposition groups. Right from the beginning of the conflict, the chaos has failed to produce a clear and consistent face representing the voices of resistance as an alternative to the alleged impostor.

Mr. Agathon Rwasa, leader of Burundi’s main opposition party National Liberation Forces (FNL) was at the vanguard of the resistance in the build-up to the elections but he ‘sold’ out after accepting a government appointment as deputy Speaker of Parliament.

Little known Delphin Ndikumana was unveiled as the head of opposition delegation in the first leg of talks held in Kampala last month. Assuming Ndikumana is the face of opposition, can the negotiations now begin?

Four questions must be answered beginning with, what mutual negotiating outcome do the parties want to achieve, peace? The talks were initiated by external parties meaning that the Burundian actors don’t see the need yet for peace talks as the best way out of their mess.

What is the best-case, second-best case and worst case scenarios of these talks? This has to do with the expectations of ‘aggressor and aggressed parties.’ For Nkurunziza, we can assume he wants to be left alone to have his second term in office, seen as third term by opposition.

The opposition on the other hand, reportedly wants the restoration of constitutionalism which means; Nkurunziza must leave office and give way for fresh elections in which he is not a candidate.

For successful negotiations, actors must have strong chips to use in bargaining for their respective demands, as it is now, the opposition, leaderless as it appears, has nothing to use against Nkurunziza in a bid to secure their demands.

Nonetheless, what is Nkurunziza’s government willing to give in return for the opposition leaving him alone? This takes us back to what the opposition is demanding and since they don’t have any cards to play against Nkurunziza, they must revise their requests, compromise.

If they refuse to compromise and the government walks away from the talks, what are the likely consequences?

As long as the Burundian opposition remains generally leaderless, Nkurunziza has nothing to lose if the negotiations collapse.

Therefore, it is clear what to expect from the Burundian talks; nothing. To win any concessions from Nkurunziza, the opposition must first take away something that Nkurunziza’s government values, something close to his power, a major political constituency.

That way, the opposition will have a bargaining chip which is missing at the moment and it will also make Nkurunziza appreciate peace talks as crucial for his own political survival.

I know that the sweetest victory is one won without fighting but I also know that sometimes, to put down the gun, one must pick it up first.