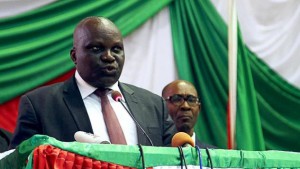 In a statement provided to AFP Sunday, the head of the CNDD-FDD party said Kagame had previously “experimented” with genocide, referring to the 1994 Rwandan genocide in which around 800,000 people were killed, mostly ethnic Tutsis.

“The genocide laboratory is in Rwanda because President Kagame, having experimented there, (wants) to export it to Burundi (to) play a minor imperialist,” wrote CNDD-FDD president Pascal Nyabenda.

Ties between the Great Lakes region nations are already at a low ebb, with Burundi and the United Nations both accusing Rwanda of supporting Burundian rebels.

Nyabenda also claimed that some European governments supply arms and funds to the Rwandan leader, who he said is responsible for “recruiting and training young Burundians in refugee camps in Rwanda, so that they can return home to commit acts of genocide”.

The ruling party chief went on to criticise the Catholic church which recently called for a dialogue between Kigali and Bujumbura to help de-escalate the growing crisis.

Nyabenda also condemned foreign journalists for taking up the cause of “terrorists”, the term used by the ruling party to refer to opponents of the government, both armed and peaceful.

Burundi has been in political crisis since April last year when President Pierre Nkurunziza controversially decided to run for a third term, which he then won in a July election.

The subsequent unrest has left 400 people dead, while some 250,000 have left the country and violent attacks have become a daily routine, raising fears of a return to the civil war fought between 1993-2006.

Concerns have been raised that more radical elements in Burundi’s ruling party are gaining influence.

“The Hutu extremist faction of the CNDD-FDD was marginalised until the start of this crisis … it is clear that they are now in control of the country,” a concerned diplomat told AFP on condition of anonymity.

The diplomat noted that Nyabenda, as well as being ruling party head, is also president of the national assembly and the number two figure in the Burundian state.

“It is feared that there would be dire consequences if the crisis worsened or if there was a serious incident like the death of a senior party official,” he said.

The CNDD-FDD party was formed from the main Hutu rebel group that fought against the formerly Tutsi minority-dominated army during the Burundian civil war.

The movement initially had close ties to President Kagame’s Rwandan Patriotic Front party but relations have soured in recent years.