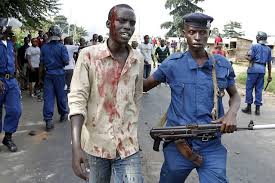 Burundi’s government said Sunday it would not agree to the deployment of African Union (AU) peacekeepers, warning that they would be seen as “an invasion force”.
The announcement came a day after the 54-member bloc said it would send a 5,000-strong force to halt spiralling violence in the tiny central African country as fears grow that it is rapidly sliding towards civil war.
It gave the government in Bujumbura a four-day deadline to agree to the offer, but warned it would send troops anyway.
“Burundi is clear on the matter: it is not ready to accept an AU force on its territory,” deputy presidential spokesman Jean-Claude Karerwa told AFP.
“If AU troops came without the government’s approval, it would be an invasion and occupation force, and the Burundi government would reserve the right to act accordingly.”
Burundi has so far dismissed proposals for any peacekeeping force on its territory and Karerwa said any such move by the AU would have to be approved by the UN Security Council.
“The Burundi government believes the AU resolution cannot be automatically applied and must first be endorsed by the UN Security Council,” he said.
The Security Council late Saturday urged all Burundian stakeholders to cooperate with the proposed African Union peacekeeping mission.
It condemned violence on all sides and the “persistence of impunity, as well as of the inflammatory statements made by Burundian political leaders”.
The standoff comes as international alarm grows over soaring unrest in Burundi where at least 87 people were killed on December 11 in a crackdown by security forces after an attack on three military bases.
Many of the dead were youths who were shot dead by the security forces.
– ‘Arbitrary killings’ – Burundi has been in crisis since April, when President Pierre Nkurunziza began seeking a third term in a move that even some in his own camp judged unconstitutional.
The situation deteriorated when Nkurunziza was re-elected in July in a poll that was boycotted by the opposition.
The country has since spiralled into violence and there are fears in the international community this could deteriorate into genocide.
In a strongly-worded statement issued on Saturday, the AU said it would “take additional measures” to ensure the new force’s deployment.
It underlined its determination “to take all appropriate measures against any party or actor… who would impede the implementation of the present decision”.
The announcement came two days after the bloc’s Peace and Security Council met over the crisis and agreed it would not allow “another genocide” on African soil.
No details have been given about which countries might send troops — or when they would be deployed.
The AU has urged talks with its members including regional countries in the AU’s East African Standby Force (EASF) “to generate the troops and police elements needed to quickly reach the authorised strength”.
The 10-nation EASF includes Burundi itself, and is one of five AU regional bodies with a mandate to boost “peace and security”. It has never deployed and is currently a force in principle only.
AU rights investigators last week returned from a fact-finding mission to Burundi expressing “great concern” after witnessing some of the heaviest fighting in the troubled country for months.
The AU team said it had reports of “arbitrary killings and targeted assassinations” as well as arrests, detentions and torture.
Karerwa said both chambers of the national parliament would hold an extraordinary meeting on Monday to debate the African Union move, adding that “Burundi always reaches out to the international community”.
newvision.co.ug