There are fears the African nation of Burundi could enter civil war if a resolution is not reached at the next round of peace talks later this month. 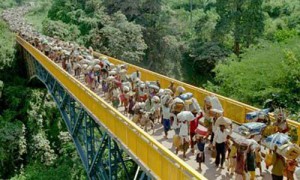 Violence in the African nation of Burundi has led to a refugee crisis in surrounding countries, including Tanzania, where camps have become overcrowded.

The crisis has been ongoing since April last year, and there are fears Burundi could descend into civil war if a resolution is not reached at the next round of peace talks later this month.

The majority of Burundi’s people are internally displaced by the conflict.

Most have left the urban centres, where the majority of violence has taken place, to go north or back to their home villages.

More than 230,000 refugees have also fled to neighbouring countries.

Around 120,000 people have escaped from Burundi and fled to Nyarugusu camp in Tanzania.

The camp was originally built to house mainly Congolese refugees, but the UNHCR’s representative in Tanzania, Joyce Mends-Cole, said the camp was now overcrowded.

“We’re trying to ensure people have better dignity and better protection. We have had attacks on women and we’re really trying to address that. It has implications for many things, whether it’s for protection, the impact on the environment, for education.”

The UNHCR had aimed to shift some refugees to one of three other camps to deal with the influx, but major problems with water have put a halt to the relocation.

There have also been recent reports of a staggering number of rapes against civilian and opposition women inside Burundi.

“This is something that — especially in a country like Burundi, where women are essentially the backbone of the workforce and family — the country will have a long way to go if it’s to heal,” Ms Mends-Cole said.

“No refugee camp is a place where you or I would like to live in.

“We should be looking at refugee situations with really an idea that the world needs peace and development.”

Country on brink of civil war

The next round of peace talks will be held later this month, but with several previous failed attempts, experts fear they may not lead to a resolution that is so desperately needed.

The crisis began last April, when President Pierre Nkurunziza decided to run for a third term in office.

“What we’ve seen is a series of protests that have spawned violence both by the government and a little bit of retaliatory violence by armed elements of the opposition,” Dr Jones said.

The United Nations has put the death toll at more than 400 people, but that figure may not be accurate.

“We’ve seen a steady deterioration, which has led to worsening violence to where it seems as though we’re finding bodies in the streets every day,” Dr Jones said.

“Then you have larger killings of dozens of people at a time.

“We’re never sure of the number because the government doesn’t release statistics and even counting the bodies has been very difficult according to the International Red Cross and other sources.”