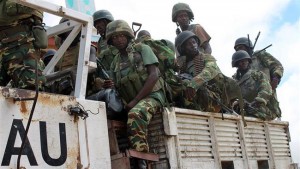 Thousands of supporters of Burundi’s President Pierre Nkurunziza have protested against a plan by the African Union to deploy peacekeepers to the country, APA reports quoting Press TV.

The protesters took to streets in several cities, including the capital, Bujumbura, on Saturday.

The AU has decided to send 5,000 peacekeeping troops under the African Prevention and Protection Mission in Burundi (MAPROBU) to quell the escalating unrest in the country.

Burundi has been rocked by turmoil since April, when it was announced that Nkurunziza would run for a third term in what was viewed by the opposition as unlawful and against the constitution.

Nkurunziza paved the way for a revision in the constitution to take part in the presidential race and was re-elected in July, but the violence has since escalated.

The demonstration in the capital was led by Vice President Gaston Sindimwo, who said the army is capable of halting violence and protecting all Burundians. Other protests were held in areas across Ngozi Province, Nkurunziza’s hometown and a stronghold of the ruling party.

Burundi’s government has rejected the AU plan. It says the troops are part of an ‘invasion force.’

Alice Nakuto, a member of the ruling party’s militia known as Imbonerakure who took part in Ngozi protests, said, “We would like to warn AU troops that the majority of Burundians don’t want them and they should not impose themselves on the people of Burundi.”

People gesture on December 26, 2015 during a demonstration against the Republican Forces of Burundi on the beach of the Lake Tanganyika near the port of Bujumbura. (AFP Photo)

Earlier this month, nearly 90 people died when three military installations were attacked by rebels who said this week they are fighting to topple Nkurunziza.

At least 400 people have died in Burundi’s violence since April. About 220,000 have fled to neighboring countries, according to the United Nations.

On December 24, Bujumbura announced that it would swiftly crush rebels after they announced a day earlier that they had joined forces to create the Republican Forces of Burundi to oust President Nkurunziza.

The African Union says it has written to Nkurunziza urging him to agree to the deployment of the peacekeeping force.

Ugandan President Yoweri Museveni is scheduled to mediate talks between the fighting sides in Kampala next week. Fourteen Burundian groups are expected to attend.