You are here: Home / Africa / Burundi Police patrol center of capital after series of blasts 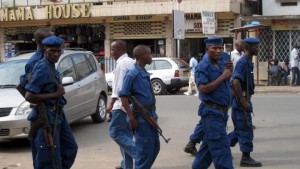 Roads leading to Bujumbura’s mayoral office were guarded by the police after at least four blasts and gunfire were heard in the heart of the city. Police spokesman Pierre Nkurikiye said on national radio that the government will make an announcement about the explosions later, without specifying when.

Violence spurred by President Pierre Nkurunziza’s bid for a third term has left more than 400 people dead in Burundi since April. Nkurunziza’s opponents say he violated a two-term limit set out in accords that ended a civil war in 2005. The African Union is planning to send as many as 5,000 peacekeepers to quell the bloodshed, a move Burundian authorities have rejected.