You are here: Home / Africa / Burundi on the brink of civil war as peace talks collapse 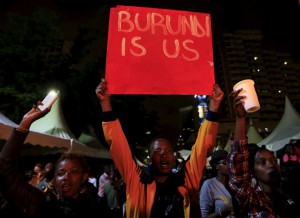 Burundi is close to civil war, with genocide a real possibility, after the government refused to participate in peace talks with the opposition, according to experts.

President Pierre Nkurunziza’s government rejected an invitation to take part in talks scheduled for Wednesday in Tanzania, saying it objected to the inclusion of opposition figures whom it holds responsible for the violence gripping the country, The East African reported. The United Nations (U.N.) estimates that more than 400 people have been killed in Burundi since Nkurunziza’s decision to run for a third term, a move opponents criticized as unconstitutional.

The Burundi government’s absence on Wednesday leaves the Ugandan-sponsored peace talks in tatters and risks escalating the crisis in the country, according to Chris McKeon, Africa analyst at political risk consultancy Verisk Maplecroft. “The longer these talks drag on without an agreement, the more days of violence Burundi will experience,” says McKeon.

Explaining the decision to pull out of the talks, Joseph Bangurambona, permanent secretary in Burundi’s ministry of foreign affairs, told Reuters on Tuesday that the government was opposed to negotiating with “those who are supporting violence” in opposition parties. Bangurambona said that dialogue would resume “on condition that the mediators iron out the irregularities” but declined to propose a new date.

“It is difficult to see a clear path to peace,” says McKeon. “By refusing to engage with the opposition, the government has effectively ruled out a negotiated solution to the crisis.”

The government in the capital Bujumbura has also rejected plans for a 5,000-strong African Union peacekeeping force to be deployed in the country, with Nkurunziza saying that such an intervention would be interpreted as an attack on Burundi and the country would be forced to defend itself. “The country will have been attacked and it will respond,” he said in a state radio broadcast on December 30.

Nkurunziza’s defiant stance and the lack of dialogue with opposition parties means that a descent into civil war and even genocide remains a possibility, says David Simon, co-director of the Genocide Studies Program at Yale University. U.N. officials have previously warned that the conflict in Burundi is taking on an increasingly ethnic tone, reminiscent of the situation in Rwanda ahead of the 1994 genocide. In Rwanda, some 800,000 members of the Tutsi minority, as well as moderate members of the Hutu majority, were killed by Hutu extremists.

“The embattled [Burundi] government may be turning to ethnic—as in Hutu vs. Tutsi—mobilization as a last-ditch means of bolstering its own legitimacy,” says Simon. “This is what happened in Rwanda. It can still happen in Burundi, even if the basic conception of ethnicity is generally different between the two countries.”

The ongoing conflict in Burundi has forced more than 230,000 people to flee to neighboring countries, including Tanzania and Rwanda. Paul Kagame, president of Rwanda, recently rejected accusations by U.S.-based advocacy group Refugees International that Burundian refugees in Rwandan camps were being recruited by non-state armed militias.