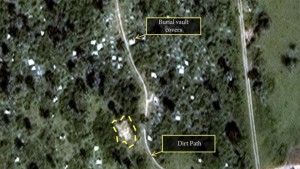 Rights group Amnesty says it has found five possible mass graves near Burundi’s capital, where security forces are accused of killing scores of people in December.

Meanwhile, Burundian police said they had arrested two foreign journalists who were reporting on armed groups.

Violence in the country began last April, when President Pierre Nkurunziza announced he would seek a third term.

African Union (AU) leaders are due to discuss the crisis in Burundi at a summit in Ethiopia.

They want Mr Nkurunziza to accept peacekeeping troops to prevent Burundi sliding into ethnic conflict, but analysts say he is unlikely to agree.

Amnesty says satellite images show disturbed earth at sites in the Buringa area on the edge of the capital Bujumbura that are consistent with witness reports.

“These images suggest a deliberate effort by the authorities to cover up the extent of the killings by their security forces and to prevent the full truth from coming out,” said Muthoni Wanyeki, Amnesty’s regional director for East Africa, the Horn and the Great Lakes.

At least 87 people were killed in December’s crackdown, which came after military bases were attacked by gunmen, but the UN said the true number may be much higher.

The UN said it was also analysing satellite images to investigate reports of at least nine mass graves, including one in a military camp said to contain more than 100 bodies.

“The two foreigners were arrested in the company of armed criminals,” the security ministry said in a statement, adding that a mortar, a Kalashnikov rifle and pistols were also seized.

Le Monde has demanded their release (in French) while the Foreign Correspondents’ Association of East Africa said it was “extremely concerned” by the arrests.

The two journalists have covered the region for many years and have won awards for their work.