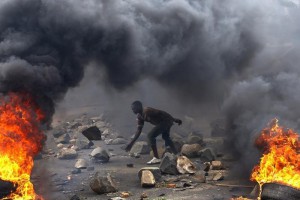 The Burundian government has agreed to allow 100 human rights observers and 100 military monitors from the African Union (AU) to deploy in Burundi to monitor the unrest in the country.

The government has committed to “continue the steps it has begun to open up space for free political activity by the people of Burundi and ensure the freedom of the media”, a high level AU delegation of five African leaders chaired by South African President Jacob Zuma announced on Saturday.

The delegation met Burundian President Pierre Nkurunziza, former president Domitien Ndayizeye, opposition parties, and civil society representatives in Bujumbura on Thursday and Friday to try to resolve the crisis in the country.

The political crisis in the country was sparked by Nkurunziza’s decision to run for a third term in 2015, despite the two term limits in the constitution.

The delegation said in a statement that Ugandan President Yoweri Museveni – the regional mediator of the peace talks in Burundi ,”will convene an inclusive dialogue that will be attended by all important stakeholders as soon as possible to continue the work that he has already started of facilitating peace talks in Burundi”.

However, several opposition parties expressed strong dissatisfaction at the delegation’s intervention, suggesting it was biased towards Nkurunziza.

They complained that the question of possibly deploying a proposed 5000-strong AU peacekeeping force, called Maprobu, in Burundi was taken off the agenda even before their talks with the AU leaders began.

They also complained that Zuma’s delegation was not prepared to discuss the legitimacy of Nkurunziza’s third term.

Alliance of Democrats for Change Coalition ADC-IKIBIRI President Léonce Ngendakumana suggested that the delegation had not shown enough will to protect civilians.

“Before we began the meeting, we were given heavy conditions. We were told that we could not discuss the AU proposal of deploying the peacekeeping mission in Burundi, whereas Burundians are being killed every day,” he said.

Opposition parties said Zuma had told them in the meeting that Maprobu would only be deployed if the Burundian government agreed.

Nkurunziza’s government has already made it very clear it will not agree to the deployment.
Union for National Progress (Uprona) spokesperson Tacien Sibomana complained that the AU delegation had refused to debate Nkurunziza’s third term and considered it legal.

“It is not reassuring because even when the delegation met political leaders on Thursday, South Africa’s Jacob Zuma was quick to say that it was out of the question to put on the agenda the question of President Nkurunziza’s third term. They explained the Constitutional Court had judged it valid. But we have demonstrated that the Constitutional Court was unfair. This will have consequences – extrajudicial killings, human rights violations, and massive arrests will not stop in the country,” Sibomana said.

South African International Relations and Co-operation Minister Maite Nkoana-Mashabane confirmed at a press conference in Pretoria on Friday that she considered Nkurunziza’s third term to be legal because it had been verified by the courts.

Zuma told journalists after the meetings that all the meetings had been friendly and very good “and we have agreed on a number of issues that will appear in the communiqué”.

In the meetings he had strongly advised all parties to work together to find an inclusive political solution to the current crisis.

The other members of the AU delegation were Presidents Macky Sall of Senegal, Ali Bongo Ondimba of Gabon, and Mohamed Ould Abdel Aziz of Mauritania, and Prime Minister Hailemariam Desalegn of Ethiopia.

In its communiqué, the delegation stressed “the importance for all the people of Burundi to participate in the inclusive dialogue that is being facilitated by President Museveni”.

But it did spell out if this included all armed groups, including those who participated in an attempted military coup last May. Nkurunziza’s government has insisted to far that it will not speak to those.

The delegation also urged the international community to restore assistance to Burundi “as requested by the people of Burundi so that they can continue with building their country”. Some international donors have cut off aid because of what they regard as the Burundian government’s breach of human rights and the rule of law.

The delegation said it had expressed its concerns to the Burundians about the levels of violence, loss of life, and the general state of political instability in the country.

“The visit has been fruitful and productive. We trust that it will contribute immensely to taking the peace process forward.”

However, apart from the misgivings of some of the opposition parties, the absence of many opposition leaders who are in exile also cast some doubt on the likely success of this intervention by the AU.

Zuma’s office announced on Friday that he had been unable to return to South Africa that evening as planned because of technical problems with his aircraft.

He arrived in Burundi on Wednesday with a protection squad of about 40-50 heavily-armed SA National Defence Force soldiers.