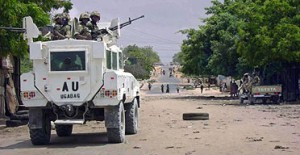 The African Union wants the United Nations Security Council to authorise the deployment of the continental body’s peacekeepers in Burundi in light of continued violation of human-rights and the political instability that has rocked the country for nine months.

AU Chair Dr Nkosazana Dlamini-Zuma said the situation in Burundi needs unity of purpose and action by the international community. She appealed to AU member states to strive to promote and defend African positions as articulated by the Peace and Security Council to send 5,000 troops to Burundi.

“The members of the Security Council expressed deep concern about the continuing escalation of violence,” said Dr Dlamini-Zuma.

“There is an urgent need to resume the intra-Burundi dialogue and to authorise the deployment of the African Prevention and Protection Mission in Burundi (Maprobu).”

A 20 member team of the UNSC is to visit Burundi to urge the government to resume the talks mediated by Uganda’s President Yoweri Museveni, and assess the security situation to determine whether Maprobu should be deployed.

The Burundi parliament had earlier unanimously rejected the deployment of peacekeepers, warning that doing so would violate the country’s sovereignty.

The debate in parliament, which focused on Maprobu and claims of genocide in the country, saw all the MPs denounce what they called propaganda by some “self-proclaimed Burundian leaders” for selfish interests.

The African Union Peace and Security Council passed a resolution to send 5,000 peacekeepers to Burundi for an initial renewable mandate of six months to protect civilians.

That followed a report by the African Commission on Human and People’s Rights that recorded cases of arbitrary and extrajudicial killings, targeted assassinations as well as arrests, detention and torture in Burundi.

According to the United Nations Human Rights Office, more than 300 people have been killed and thousands have fled the country after violence erupted last April, when President Pierre Nkurunziza announced his intention to run for a third term in office.

Burundi is currently experiencing relatively quiet nights but assassinations have continued as three government officials were shot dead by an unknown armed group in Bwiza, a Bujumbura suburb, early in the week.

The Burundi National Dialogue Commission (CNDI), which was formed by President Nkurunziza, began talks in the northern town of Kirundo with the government pledging inclusivity.

“We are set for the talks and we have said time and again that our government is ready to talk to all peaceful stakeholders as it was stated in the resolution of the Security Council,” said Foreign Affairs Minister Alain Nyamitwe.

“We have invited the Ugandan facilitator to come to Burundi and agree with all the stakeholders in Burundi on the way forward.”