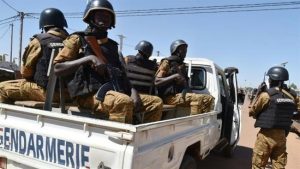 Burkina Faso security forces killed three suspected Islamist militants and arrested one more on Tuesday morning in an operation in the capital Ouagadougou, its gendarme force said according to reuters.com.

One gendarme was killed and four others wounded in the fighting in Ouagadougou’s Ragnongo neighbourhood, while one civilian was also injured, the force said in a statement.

Ouagadougou has been hit by several Islamist militant attacks in recent years. In March, militants from a Mali-based al Qaeda affiliate killed eight people and wounded dozens more in coordinated raids on the army headquarters and French embassy.

Burkina soldiers and police have also come under repeated attack near the borders with Mali and Niger, where militant groups linked to al Qaeda and Islamic State easily cross the porous frontiers.

The statement said that the gendarmes had also seized AK-47s, pistols, explosives and military attire during the raid.