You are here: Home / Africa / Burkina Faso: Islamic terrorists killed 24 people and wounded 18 in an attack on a Protestant church 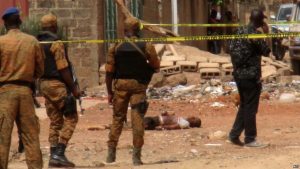 Islamic terrorists have killed 24 people and wounded 18 in an attack on a Protestant church in a village in northern Burkina Faso, the regional governor has said.

A group of “armed terrorists” entered Pansi in Yagha province and “attacked the peaceful local population, after having identified them and separated them from non-residents”, Col Salfo Kaboré said.

The incident took place on Sunday during a weekly service, security officials said. “The provisional toll is 24 killed, including the pastor … 18 wounded and individuals who were kidnapped,” Kaboré added.

A resident of the nearby town of Sebba said Pansi villagers had fled there for safety.

Christians have become frequent targets in the north of the country.

On 10 February, suspected jihadists in Sebba seized seven people at the home of a pastor. Five bodies were found three days later, including that of the pastor, according to the local governor.

According to UN figures, nearly 4,000 people were killed in jihadist attacks in Burkina Faso and neighbouring Mali and Niger last year.