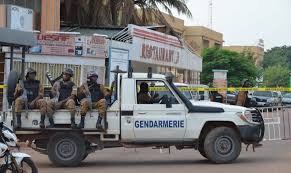 Burkina Faso and French investigators pushed ahead with a probe into deadly jihadist attacks last week suspected to have targeted a major anti-terror meeting, like reported by dailymail.co.uk.

Forensic teams were at work at the scenes of last Friday’s twin attack in Burkina Faso’s capital Ouagadougou, and two suspects were being questioned, sources said.

The operation, using guns and a car bomb, struck the country’s military headquarters and the French embassy.

Nine assailants and seven soldiers were killed and at least 80 people were injured, according to a government toll. The operation was claimed by the Group to Support Islam and Muslims (GSIM), led by the Malian jihadist Iyad Ag Ghaly.

One of the two suspects is believed to have played a key role in the operation, Burkinabe investigators said, adding that clues the attackers had information from within the armed forces “are starting to be confirmed”.

The attack on the military headquarters appears to have been aimed at a scheduled meeting of the so-called G5 Sahel — a French-backed group of five countries fighting jihadism in the volatile Saharan region.

The room in the complex where the meeting was to have taken place was wrecked by the car bomb — however, the venue of the meeting was swapped at the last minute, which prevented carnage.

A team of 10 French experts have arrived to support the inquiry, according to French police and judicial sources.

Issoufou is current head of the G5 Sahel, which comprises Burkina Faso, Chad, Mali, Mauritania and Niger, while Gnassingbe is current chairman of the West African regional bloc ECOWAS, the Economic Community of West African States.

Issoufou paid tribute to “our allies, who are paying a heavy price in the fight that we are leading, side by side, against terrorism.”

“We know that the terrorists and their accomplices are seeking to undo our alliance,” Issoufou said.

“We often hear them calling our allies ‘foreign forces.’ For us, they are not foreign forces but allied forces who are fighting in the same cause as we are.”

The force is intended to become fully operational in mid-2018, and operate alongside France’s 4,000 troops in the area as well as the UN’s 12,000-strong MINUSMA peacekeeping operation in Mali.

Burkina Faso has been the target of jihadist attacks since 2015.

On August 13 last year, two assailants opened fire on a restaurant on the capital’s main avenue, killing 19 people and wounding 21. No one has so far claimed responsibility for it.

On January 15, 2016, 30 people — including six Canadians and five Europeans — were killed in a jihadist attack on a hotel and restaurant in the city centre.

GSIM also claimed responsibility for a February 21 attack near the border with Niger which left two French soldiers dead and a third injured in an area which is believed to shelter jihadists.