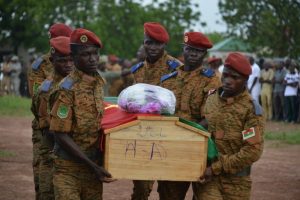 A terrorist attack on a military police post in northern Burkina Faso killed at least 19 officers and one civilian on Sunday, the Ministry of Security said according to thenationalnews.com.

The post “faced a cowardly and barbaric attack, an attack during which our forces, with a lot of dignity and devotion kept their position during the fighting”, he said.

Mr Kone told the Associated Press that the death toll was likely to increase.

A soldier said many bodies had been seen by personnel in a military helicopter flown over the site.

The attack is the latest in a series of violent incidents across the country, which for more than five years has been overrun by militant groups linked to Al Qaeda and the ISIS.

Thousands of people have been killed and more than 1.4 million displaced by the violence.

The has been a sharp increase in fighting in Soum province, one of the centres of the violence, after months of relative calm owing to negotiations between the national security service and some extremist groups amid last year’s presidential election.

But since October, explosives have been found outside the main town of Djibo and there has been a resurgence of checkpoints set up by extremists where people have been kidnapped, a local government official said.

The latest attack was a significant blow because the military police detachment in Inata was the only one that stood its ground for two years while troops at surrounding bases retreated when extremist violence escalated, said Heni Nsaibia, senior researcher at the Armed Conflict Location and Event Data Project.

“Unfortunately this two-year stand may today have come to an end unless measures are taken,” he said.

“I think these regular large-scale attacks which take place on a weekly basis are indicative of the uphill battle that the Burkinabes are facing to effectively regain ground and stabilise a very fragile security situation.”

A widely circulated internal military report from November 12 showed the detachment in Inata ran out of supplies two weeks earlier and had to survive by killing animals near by.

Ill-equipped and undertrained security forces are struggling to stem the violence. Last week, Goudoubo refugee camp in Seno province, in Burkino Faso’s Sahel region, was forced to close after a series of security breaches, the UN said.

An internal UN document on the security situation in the sub-Saharan region has been seen by AP and said that despite the “best efforts” of the security forces, they are unlikely to take control of the area.