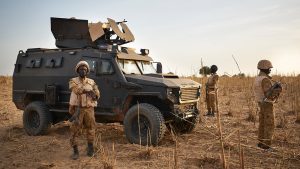 Three Burkina Faso soldiers died and 11 militants were killed during an attack on the troops in the north of the Sahel West African nation on Wednesday, the army said in a statement.

“The army detachment in Thiou, in the Yatenga Region was the target of an attack by armed individuals. Eleven terrorists were neutralised. However, three soldiers fell during combat and dozens were wounded,” the army said in the statement.

The attack is the latest of three since Nov. 14 that have killed over 60 Burkina Faso security forces and over a dozen civilians, sparking nationwide anger and protests, with calls for President Roch Marc Kabore to resign.

Opponents urged fresh protests on Saturday against the government’s inability to contain a four-year insurgency by militants linked to al Qaeda and the Islamic State which has killed thousands and displaced over a million.

Some of the anger spilled over last week and was directed against former colonial power France, which has deployed thousands of soldiers in the West Africa Sahel region to combat the militants.

Hundreds of people in the city of Kaya massed over the weekend to block a convoy of French logistics and armoured vehicles on its way to neighbouring Niger. The convoy has still not been able to leave Burkina Faso.

The government on Wednesday implored the population to let the convoy pass. It also extended its suspension of mobile internet service while offering conflicting reasons for why access was cut in the first place.

Internet access went out on Saturday in the wake of protests against the government and French military forces.