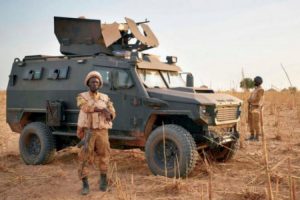 Two jihadists were killed during an operation to break up a jihadist base in northern Burkina Faso, the West African state’s army said Tuesday.

The raid in the Tongomayel area took place last Friday led to the “dismantling of a terrorist base,” the army said in a statement.

“Result: two neutralized terrorists (and) the seizure of improvised explosive devices and various materiel,” it added.

The day before, the army had lost four soldiers in a newly-formed regiment on a reconnaissance mission near Mentao, in the same province of Soum.

On Saturday, a gendarme, or policeman, died in the center-north of the country, the army said.

Northern Burkina Faso has been badly hit by jihadists who started making incursions from neighboring Mali in 2015.

More than 1,100 people have lost their lives and over a million have fled their homes.

The former French colony is one of the world’s poorest countries, and its armed forces are under-equipped and poorly trained.

Last year, 4,000 died in Burkina Faso, Mali, and Niger jihadist attacks or ethnic violence fomented by the insurgency, according to the UN.