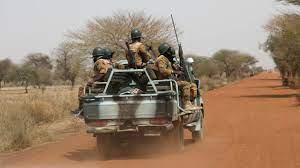 At least nine people were killed when attacking a position of the Defense of the Motherland (VDP) in Burkina Faso in the central part of the country, local sources said.

“A number of unidentified gunmen on Sunday attacked the position of the VDP at Palsegue village … Initial death toll stands at nine,” a local police officer told Xinhua on condition of anonymity. However, an administrative source said eight civilians, including the chief of the village, were killed.

VDP members are civilians armed by the Burkina Faso government to support the armed forces to stabilize the West African country.Since 2015, Burkina Faso has been facing a worsening security situation with terrorist attacks that claimed the lives of over 1,000 people and displaced over 1 million others.