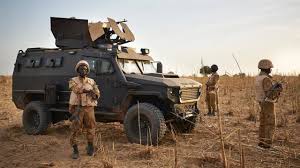 Eight civilian members of an auxiliary force in Burkina Faso’s anti-jihadist campaign were killed in an ambush on Wednesday, like reported by africa.cgtn.com.

A security source says the attack happened in the Gorgadji area in north Burkina Faso.  A patrol of the VDP (Volunteers for the Defence of the Motherland) was targeted. In addition to the eight confirmed fatalities, several others are missing.

The patrol was sent out after cattle were stolen by armed men on Tuesday, the official added. Reinforcements had been sent in after the ambush to hunt for the killers and reassure local people, another security source said.

Burkina Faso, a poor, landlocked country in the heart of the Sahel, has been fighting a ruthless Islamist insurgency.

The VDP was set up in December 2019 to help the beleaguered military fight jihadists but it has suffered major casualties.

The volunteers are given two weeks’ military training, and then work alongside the security forces, typically carrying out surveillance, information-gathering or escort duties.

AFP reports that well over 200 VDP members have died since January 2020, nearly 50 of them this year.

More than 1,300 people have died and at least a million people have abandoned their homes, according to estimates.