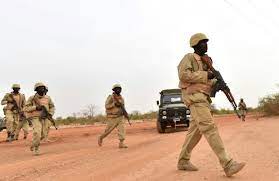 At least three police officers and four members of a government-backed civilian militia were killed while on patrol in eastern Burkina Faso on Monday, government and security sources said on Tuesday.

The victims were ambushed in the town of Tanwalbougou, in Gourma province, said the sources, requesting anonymity because the are not authorised to speak publicly. The sources said that the death toll could increase.

The four civilian fighters killed in were members of the Homeland Defence Volunteers (VDP), a group that receives funds and training from the government to help contain an Islamist insurgency.

There was no immediate claim of responsibility for the attack. Attacks by insurgents linked to Al Qaeda and Islamic State are frequent in Burkina Faso as well as in neighbouring Mali and Niger, where insurgents have expanded their reach and attacks in recent years.

In neighbouring Mali, the army said in a separate statement that it had killed 12 jihadists in the central Mopti region on Tuesday morning and that one soldier had died in the fight.

The Tuesday attack is the fourth by insurgents on Malian forces and United Nations peacekeepers since Friday.