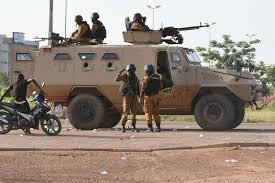 Six people, five of them police, were killed in a “terrorist attack” in eastern Burkina Faso, the defence ministry said according to news24.com.

Five people – four gendarmes and a civilian – were killed when their vehicle struck a mine about 100km from Fada N’Gourma, the chief town in the east of the Sahel country, it said in a statement.

A sixth person, also a gendarme, was killed later in a shootout with the assailants.

The attack happened while their convoy was returning from escorting a mission to a mining complex at Boungou, the ministry said.

“The lead vehicle hit a mine. The rest of the convoy came under heavy fire,” it said.

Burkina Faso has been battling an escalating wave of jihadist attacks over the last three years, beginning in the north of the country but now spreading to the east, near the border with Togo and Benin.

The security forces have carried out a series of arrests in recent months, detaining hundreds of people in connection with the attacks.