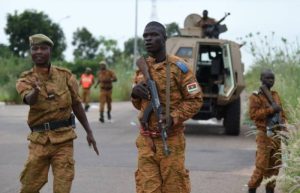 At least three Burkina Faso soldiers were killed and seven others wounded in an attack near the southern border with the Ivory Coast, security sources said on Tuesday according to thedefensepost.com.

Burkina Faso has been hit by deadly jihadist attacks since 2015, mostly in the northern and eastern regions close to Mali and Niger but also in the south.

“The toll is three fallen soldiers and seven wounded, some of them seriously,” the security source said.

Another security source said “a soldier died during the attack” which also left “nine wounded.”

He added: “Unfortunately, two of the wounded have succumbed, bringing the toll to three dead.”

The source said that troops killed six enemy fighters while efforts to secure the area and remove assailants continued.

A week ago, an armed police officer was wounded and an assailant killed in an attack near Tehini, along the Burkina Ivorian border.

On October 11, two soldiers on patrol were killed by a home-made explosive device in Farakorosso.

Attacks, normally blamed on jihadist groups affiliated with the Islamic State or Al-Qaeda, have killed around 2,000 people and forced more than 1.4 million to flee their homes.