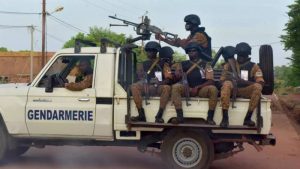 Jihadists have killed around 20 people in attacks in three villages in northern Burkina Faso, the epicenter of a five-year-old jihadist insurgency, government officials said on Thursday, like reported by thedefensepost.com.

The attacks took place on Wednesday in the villages of Demniol, Bombofa, and Peteguerse in Seno province, government spokesman Remis Fulgance Dandjinou said in a statement.

“The provisional count of these attacks perpetrated in markets and villages shows about 20 victims, as well as wounded and missing persons,” he said.

Regional governor Salfo Kabore confirmed the attack in another statement.

An area resident told AFP at least 24 people were killed in the attacks.

“Wednesday is the day of the weekly market in the area,” said the resident, adding that the toll could be much higher as many people were still missing.

“The government condemns these cowardly and barbaric attacks against the peaceful civilian population,” said Dandjinou, adding that security forces have been deployed to the three villages.

Burkina Faso, one of the world’s poorest countries, is being battered by a jihadist insurgency that came in from neighboring Mali in 2015.

Hundreds have been killed in dozens of attacks on civilians this year.

Earlier this month 25 civilians, most of them people displaced by jihadist violence, were killed in an ambush in the central-north of the country, according to the UN’s refugee agency.

According to UN figures, around 4,000 people died from violence in Mali, Niger, and Burkina Faso last year