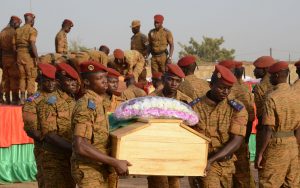 Fourteen soldiers in Burkina Faso were killed in an ambush by Islamist militants, the government said, close to a week before a presidential election, like reported by reuters.com.

Worsening insecurity in the West African country is the main issue in the Nov. 22 vote, when President Roch Marc Kabore is seeking a second term.

In recent years, militant groups with links to al Qaeda and Islamic State have killed hundreds of soldiers and civilians and stoked ethnic conflict, part of a wider security crisis across West Africa’s Sahel region.

The 14 soldiers were killed and a further eight wounded in the northern province of Oudalan, near the borders with Mali and Niger, the ministry of communication said in a statement on Thursday.

“The defence and security forces have been deployed in the area and are carrying out search operations and tracking down the perpetrators of this attack,” the ministry said.

A security source said about 10 of the assailants were killed in the ensuing battle. The army had no immediate comment.

Kabore, who faces 12 challengers on the ballot, has promised to restore security to a country that had long been a relative island of stability in a turbulent region.

The militant groups have grown stronger and extended their influence despite the presence of thousands of French and other international troops across the Sahel.

According to the United Nations, over 1 million people in Burkina Faso are displaced, more than one in every 20 inhabitants.