Mali, Algeria and now the tiny West African state of Burkina Faso – they are all paying the price for the collapse of Libya and the end of the regime that held it together. 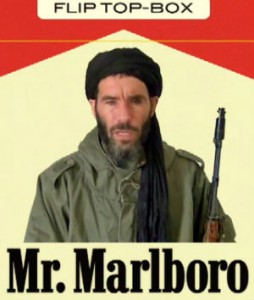 Few may have rued the day that Muammar Gaddafi was toppled – but the day after? That is a different matter.

Warehouses the size of airport terminals stuffed to the brim with all manner of stockpiled weapons were emptied into the Sahara and carried on its sand seas across North Africa, fuelling conflict and enriching radical Islamist gangsters.

The main beneficiary of this accidental reinforcement of the West’s jihadist enemies has been al Qaeda in the Islamic Maghreb (AQIM).

And most specifically Mokhtar Belmokhtar.

A one-eyed veteran of the muhujideen struggle against Russia in Afghanistan who has been declared dead frequently only to emerge again alive and murderous, Belmokhtar was the mastermind of the Amenas gas plant attack in 2013 in which 29 of his men and 40 hostages were killed at the end of a four-day siege.

His sub unit of AQIM is known as al Mourabitoun (The Sentinels) and has been rowing in strength and popularity among violent jihadists following the November attack on a hotel in Bamako, Mali, in which two gunmen and 23 others were killed in an operation that was clearly the blueprint for the latest atrocity to hit the Burkinabes.

France has been leading a discreet but effective counterterror campaign across northwest Africa since 2013 in alliance with many of its former colonies in the region, including Burkina Faso (formerly Upper Volta).

The campaign against AQIM and other groups has heated up as weapons have flowed out of Libya since 2011.

Underpinning the growing violence extremist gangs have further empowered themselves with criminal enterprises including the frequent kidnapping of Westerners for ransom, protection rackets and the smuggling of both drugs and cigarettes. Belmokhtar was so key in these industries that he was dubbed “Mr Marlboro”.

His last known appearance was reported to have been in the sights of an American drone which, US officials hoped, had killed him with a missile some time last year.

His followers have denied the claims.

Whatever the truth al Mourabitoun shows no signs of fading away as it fights on with new Libyan hardware to ensure that the legacy of the Marlboro man lives on, whatever his state of health.