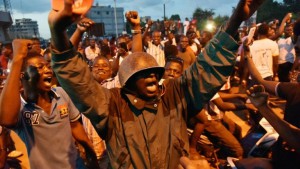 Burkina Faso army troops have entered the capital Ouagadougou without resistance and begun negotiating the surrender of coup leaders, police said early Tuesday as France’s ambassador tweeted that the interim president had been released.

“All units (of the army mobilised on Monday to march on the capital) reached Ouagadougou” overnight, Colonel Serge Alain Ouedraogo, deputy head of the Burkinabe police, told AFP.

“We must now secure the surrender of the (coup leaders) without gunfire or bloodshed,” he said.

He spoke after French ambassador Gilles Thibault tweeted that interim president Michel Kafando, who had been under house arrest, was now “at the French residence”.

Kafando had been arrested on Wednesday as Burkina was plunged into turmoil when soldiers from the powerful presidential guard regiment loyal to ex-leader Blaise Compaore detained him and prime minister Isaac Zida, himself a former deputy commander of the unit.

The RSP, an elite unit of 1,300 men, officially declared a coup the following day and installed General Gilbert Diendere, a close Compaore ally, as the country’s new leader.

At least 10 people were killed and more than 100 injured in protests sparked by the coup, which came just weeks before what would have been the first elections since Compaore was ousted in a popular revolt last October after trying to extend his 27-year grip on power.

Burkina Faso’s army chiefs on Monday ordered coup leaders to lay down their arms as troops began marching from the provinces towards the capital Ouagadougou.

“All the national armed forces are converging on Ouagadougou with the sole aim of disarming the presidential guard (RSP) without any bloodshed,” an army statement said.

It advised members of the RSP to go to the Sangoule Lamizana military barracks west of the capital, saying they and their families would remain safe.

The stark warnings came as anger grew over a west African-mediated peace deal to end the latest crisis in the landlocked former French colony.

Witnesses said the military units were greeted along their march to the capital by crowds of people cheering.

French President Francois Hollande also demanded “all those involved in the putsch to immediately lay down their arms and hand over power to the legitimate authorities—or face the consequences.”

And he warned that France, which still wields significant influence in its former African colonies, could also “apply sanctions to those opposing the holding of regular elections”.

A similar call was also issued by the presidents of Niger and Chad, who called on the renegade soldiers to “return to the barracks” and hand back power to the transition administration they toppled on September 17.

Following the coup, Senegal’s President Macky Sall, the rotating head of the Economic Community of West African States (ECOWAS), undertook three days of mediation and on Sunday came up with a 12-point plan to end the crisis.

The ECOWAS deal provides for presidential and parliamentary elections to be held by November 22 at the latest, and crucially would allow for pro-Compaore candidates to take part after they complained about being excluded from October’s vote.

ECOWAS mediators said the fate of the RSP should be decided by a future Burkinabe leader.

And they have also proposed an amnesty for those behind the coup—a suggestion that has sparked widespread anger on the streets.

Diendere on Monday had said he would honour the ECOWAS proposal and hand over power.

But Kafando told France’s RFI radio he had “serious reservations” about the ECOWAS peace deal and was sceptical that any solution to the crisis would be achieved during the Abuja summit on Tuesday.

He said he had not been invited to attend.

In Ouagadougou, residents were highly critical of the ECOWAS proposal and furious at the suggestion of amnesty for the presidential guards.

“We don’t trust ECOWAS any more. We want to get out there and take our destiny in our hands,” said Adama Traore, an office worker in his 30s.

“The bodies are not even buried and (they want) an amnesty. We shall barricade everything,” he said.

Civil society activists who played a major role in the uprising that toppled Compaore have also condemned the ECOWAS proposals, with the main “Balai Citoyen” (Civic Broom) group branding the deal “shameful”.

“We cannot accept the amnesty. There are comrades who have fallen and ECOWAS is telling us to extend an amnesty,” said Mady Ouedraogo, a spokesman for Balai Citoyen.

Although the streets of the capital were filled with traffic and many shops were open on Monday, Internet access was barely available and several mobile phone networks were not working.

Many of last year’s demonstrations against Compaore were organised through social media.