You are here: Home / Europe / Bundeswehr to continue training the Peshmerga

Bundeswehr troops are to continue to train the Peshmerga and Iraq’s armed forces. The German government has decided to extend the assignment in northern Iraq. Germany is thus stepping up its fight against the terrorist organisation IS 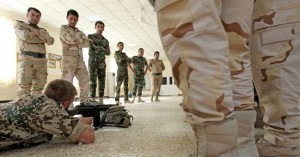 Up to 150 Bundeswehr soldiers are to train Iraq’s armed forces and regional security forces, the Peshmerga, for another year. German troops have been helping train security forces in the area around Erbil in northern Iraq for two years.

The Bundeswehr’s mandate is to be extended until 31 January 2018. The motion of the German government must still be approved by the German Bundestag.

Should the situation on the ground change during the mandate, Germany’s engagement will be reviewed, and modified if necessary.

The terrorist organisation IS remains a threat to peace and security, in spite of successes achieved in Iraq. Terrorist attacks in Europe, like the recent attack in Berlin, make this clear. The international community must thus continue its engagement in the fight against IS in order to stabilise Iraq in the long term.

A total of 65 states are involved in the fight against the so-called Islamic State (IS), along with the European Union, the Arab League and Interpol. As of 2017 NATO will also be involved in building the capacities of Iraq’s security forces inside Iraq in line with a resolution adopted at the Warsaw Summit in July 2016.

The Bundeswehr mission aims to improve the capabilities of the Iraqi armed forces and the Peshmerga. Since 2015 the Bundeswehr and its international partners have already trained more than 12,000 members of the security forces in northern Iraq. The German government attaches great importance to ensuring that all population groups in the region are trained.

Since September 2014 Germany has also supplied weapons, ammunition and equipment worth over 90 million euros to the Peshmerga. This equipment also includes what is known as non-lethal equipment for the Iraqi government, i.e. items such as radio equipment, helmets and first aid materials.

The overall support for Iraq’s forces is part of the so-called training initiative of the German government.

Initial successes can be seen

With international support, the Iraqi security forces have managed to significantly weaken the IS since 2014 in the north of the country and stop its advance. The IS now controls only a few core areas. An operation is currently underway to liberate Mosul.

Military achievements to date indicate that the training and equipment provided to Iraqi forces are having an impact in the fight against IS. International partners have developed the long-term capabilities of security forces at training centres in Iraq, some in the Kurdish region of northern Iraq.