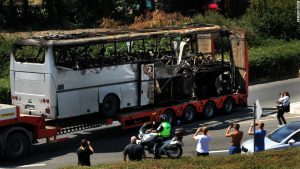 A Bulgarian prosecutor provided detailed evidence to the Bulgarian court handling Hezbollah’s involvement in the 2012 Burgas bus bombing which killed five Israelis and their Bulgarian-Muslim bus driver, but the court refused to accept it, The Jerusalem Post has learned.

Despite an official court transcript of these details and an appeal by the Israeli victims’ lawyer Yaki Rand to convince the Bulgarian appeals court to issue convictions, including terrorism charges against Hezbollah, the Post also understands there is a high chance that Bulgaria’s judiciary is looking to put the case to bed.

Throughout the trial there was a dispute about Bulgarian officials allegedly trying to charge only the individuals, while seeking to avoid angering Hezbollah by naming it in the case.

For years, Bulgarian prosecutors claimed that they had no evidence with which to tie the two defendants, who were eventually given life sentences in absentia, directly to Hezbollah and terrorism.

Yet, on September 17, 2020, after the full trial and conviction and only four days before the sentencing hearing, the prosecutor finally admitted on the record that there was significant evidence on the issue.

The prosecutor proceeded to detail the evidence into the court record, but since the conviction had already been set, the Bulgarian trial court said its hands were tied and that it could not reopen the case to charge Hezbollah and add terrorism charges.

Rand has asked the Bulgarian appeals court to order the case reopened in order to add the new charge raised by the prosecutors’ late additional comments, but there are indications that the judiciary wants to be done with the case.

It is highly unusual for prosecutors to raise new facts and charges post-conviction, and it is still unclear why the prosecutor did not raise the evidence during the trial itself.

The case shook Europe to its foundations for its audacity, but left the families of the victims and Israel partially unsatisfied because Hezbollah itself was not formally indicted or convicted.

At a July 2019 anniversary ceremony for the victims, their families had demanded that Hezbollah itself be charged in the Bulgarian trial for committing an act of terrorism.

In his speech, Kobi Price, one of the family members, noted that, “three years ago… four years after the attack, the criminal trial opened… In the indictment… only two attackers” were charged.

“We, the mourning families, ask the Government of Bulgaria to rise above narrow political considerations and to add the terror organization Hezbollah to the indictment without delay,” said Price.

He reiterated to the Post on Monday that it was unclear how much deterrence or justice could be achieved against the attackers if Hezbollah as an organization is left untouched.

In January 2018, the Post exclusively disclosed that the Bulgarian state prosecution had decided not to charge Hezbollah as an organization with involvement in the 2012 bomb attack at the Burgas airport.

Instead, the prosecutor indicted the two men allegedly involved in the attack as if they were terrorists or even regular criminals who acted without connection to an organization. The word “Hezbollah” does not appear in the indictment.

In addition, the indictment did not mention standard terrorism offenses such as “acting as part of a terrorist organization” or connecting the murder offense to terrorism, referring instead merely to disturbing public order.

Sources close to the case told the Post at the time that when the Bulgarian prosecutor was confronted with these anomalies, he claimed that no one provided him with evidence demonstrating Hezbollah’s involvement.

This directly contradicted evidence that came to light immediately after the attack from Bulgarian Interior Minister Tsvetan Tsvetanov naming Hezbollah as the culprit.

In 2013, Tsvetanov’s successor, Tsvetlin Yovchev, told reporters before a commemoration ceremony, “There are clear signs that say Hezbollah is behind the Burgas bombing.”

Bulgaria’s investigation into the Burgas bombing even led to the EU placing Hezbollah’s armed wing on its blacklist.
The ruling party in Bulgaria has changed numerous times since 2012 with some observers saying politics ham-strung the trial.

Toby Dershowitz, senior vice president for government relations and Strategy at the Foundation for Defense of Democracies, a nonpartisan think tank focused on national security, told the Post at the time of sentencing that “Bulgaria has long known that Hezbollah was behind this horrific attack and has been clear about it.

The fact that Bulgaria says it only has a mechanism to prosecute individuals, and not organizations, should not permit Hezbollah to yet again murder with impunity.”

The Post previously reported that Bulgaria sent extradition orders to Lebanon’s government regarding the two Hezbollah operatives who were then charged with the act of terrorism.

The Lebanese-Australian Meliad Farah and Lebanese-Canadian Hassan El Hajj Hassan, who have been convicted of blowing up the tour bus in Burgas, Bulgaria, are believed to be in Lebanon.

There are also US court documents from other terror and Hezbollah-related cases which have confirmed that the two convicted men as well as the third attacker who died in the attack, French-Lebanese national Jacques Felipe Martin (aka Mohammad Hassan el-Husseini), were connected to Hezbollah.

According to media reports, the two convicted murderers are alleged to have entered Bulgaria using false drivers’ licenses printed in Lebanon.
The Post sent press queries to Bulgaria’s embassy and foreign ministry on Tuesday evening.