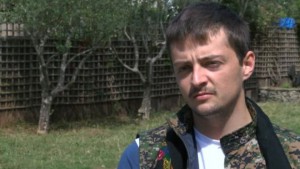 A British man who joined Kurdish fighters to battle Islamic State (IS) forces in Syria said he could return to the war-torn country within the month.

IT worker Jac Holmes, from Bournemouth, flew back to the UK in June after five months fighting alongside other Britons and Kurdish forces.

The Home Office has issued warnings that taking part in the conflict in Syria and Iraq could be an offence.

He said: “It’s been very strange obviously, coming from living in Syria, fighting on the front with the Kurds, to coming back to England.

“I could definitely see myself fighting on the front line again with the Kurds.”

Mr Holmes, who was shot through the right shoulder while fighting, was questioned by officials at Heathrow Airport after landing on a flight from Cairo.

Asked about his plans to return to Syria he said: “I’m obviously very ready for it.

“It could be months, it could within the month. I’m willing to go any time.”

More than 200,000 people have been killed since the civil war in Syria began in 2011, with IS taking advantage of the conflict to gain territory.

A Home Office spokesperson said: “The UK advises against all travel to Syria and parts of Iraq. Anyone who does travel to these areas, for whatever reason, is putting themselves in considerable danger.”