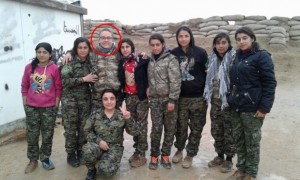 A 27-year-old UK female “revolutionary” is in Syria battling Islamic State, making her the first British woman known to have joined the fight against the jihadis.

Kimberley Taylor went to the war zone without telling her family and has said she is willing to make the ultimate sacrifice in order to end extremism, like reported by heatst.com.

She has apparently spent nearly a year with an all-female Kurdish militia. She posts regular updates  on Twitter and Facebook.

Upset by the situation which refugees face, Miss Taylor said: “I’m willing to give my life for this.”  She is currently at the frontline of the terror group’s fight against IS as it pushes towards Raqqa. Her relatives in the UK are said to support her decision.

Her father, Phil Taylor, told the Daily Mail: “I was upset in the first instance upon learning of Kimmie’s intentions… and worry about her safety.But to ask her not to follow her beliefs would be like asking her to cut her arm off. She just wants to change the world. But where most of us think and talk about it, she acts. She is truly one in a million and we are very proud of who she is and what she stands for.”

Miss Taylor grew up near Blackburn, in the north of England. She was drawn into feminist activism at Liverpool University and gained experience with weapons when she joined the university’s Officer Training Corps.  She visited Syria 18 months ago to write about it and was so “torn apart” by what she found she vowed to help.

In March last year she went to Rojava, the autonomous centre of Syria’s Kurd population, to join the all-female militia known as the YPJ. Her duties include filming and taking photographs of the unit but she has said she is willing to take up arms.

All-female fighters are apparently particularly feared by the jihadis, who believe it to be a disgrace to be killed by a woman in battle as it prohibits them from entering paradise.