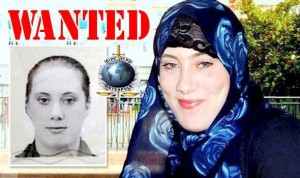 At first considered a mere oddity, “White Widow” Samantha Lewthwaite has now climbed to the top of the hierarchy of terror group Al-Shabaab, Somali security chiefs said Monday – and is responsible for the deaths of more than 400 people.

The British citizen has risen through the ranks quickly, according to the Telegraph, after several senior terrorists in the group have been killed in drone attacks.

She has reportedly been entrusted by Al-Shabaab’s leader, Ahmad Umar, to coordinate major car bombings, terror attacks, and suicide missions in Somali and Kenya.

A top British official added that she is suspected of using child soldiers for the group’s dirty work after paying money to their families.

Despite her top position, Lewthwaite is apparently still not adept at the Somali language, and has primarily surrounded herself with other British citizens joining terror efforts in the country.

Lewthwaite is the daughter of a British army soldier, who was born in Northern Ireland and spent her teenage years living in a quaint English village. She later converted to Islam, graduated from London University, and is the widow of one of “7/7 bombers” who attacked London’s transportation system in July 2005. In 2013, she was added to Interpol’s wanted list.