You are here: Home / Africa / British troops have deployed to Sierra Leone in Africa mission to halt migrants coming to Europe 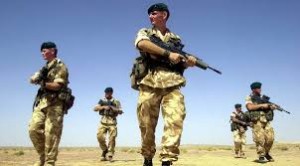 British troops have deployed to Sierra Leone as part of a new Africa mission to stop the migrant flow to Europe at its source, like reported by dailymail.co.uk.

Some 90 UK soldiers joined local troops in the jungle for the first time ever as the Armed Forces seeks to increase its military footprint in the region.

Whitehall sources said that by helping with stability in Africa, it would lead to ‘fewer migrant push factors’, and in turn boost UK security.

The source added: ‘We want to do more than pull migrants out of the water, we want to stop them before they get there.

‘We are focusing on the region to stop migrants at the source and by taking on terror in Africa it means we can stop terrorism spreading to the UK.’

It is feared the continent is at boiling point due to the deteriorating security situation in nations struggling to fight terror and gripped by civil war.

Money made from the ivory trade has also been used to fund terror activity according to experts in the region.

‘By working with allies in Africa, Britain’s armed forces can help ensure stability in the region which helps to deliver security at home in the UK.

‘Wherever terrorism rears its ugly head, Britain will continue to back our friends as they work to defeat threats posed by these barbaric groups, including Daesh, Boko Haram and Al-Shabaab.’

David Cameron was set to turn his attention to Africa last year with a planned trip around African nations but his plans were scuppered by the Brexit vote.

In the wake of the decision to leave the European Union, Britain is using its defence capabilities to expand its global influence.

The 90 soldiers from 1st The Queen’s Dragoons Guards’ ‘B’ Squadron deployed alongside 25 soldiers from the Republic of Sierra Leone Armed Forces last month.

They have been taking part in a jungle exercise to learn the skills to live and fight in the environment.

The MoD said: ‘UK focus on military support to Africa is strong, and two-thirds of Britain’s entire global short-term training team effort is invested in the continent, which equates to around 18,000 man days of training per year.

‘The UK plays a role stemming extremism in Africa, supporting security in the countries affected, in turn making Britain safer.’

UK troops are also in Tunisia helping forces defend against Islamic State by teaching them border security to prevent illegal movement from Libya.

In Nigeria, over 350 British troops are training the Nigeria Armed Forces fighting Boko Haram. In total, around 22,000 Nigerian military personnel have been trained since April 2015.

Around 65 UK troops are backing UN, EU and African Union efforts in Somalia by helping to combat the threat posed by Al-Shabaab extremists.

Some 400 troops are due to deploy to the UN mission in war-torn South Sudan, and this year the Army will deploy to Malawi to train a new force of anti-poaching trackers.

The MoD said: ‘Illegal wildlife trade is a challenge that blights much of Africa.

‘In 2017 a British Army team will deploy to Malawi to train a new force of anti-poaching trackers, helping counter the threat of poaching, and bring those responsible to justice.’