You are here: Home / West Asia / British soldiers deployed to Afghanistan in the fight against the Taliban (and Isis) 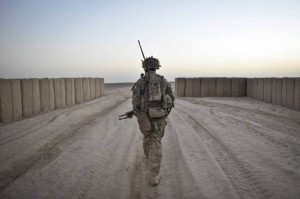 British troops have once again been deployed to Afghanistan to help in the fight against the Taliban.

The soldiers will help local Nato forces in a purely advisory role as they try to retake a town that has recently fallen under Taliban control.

The Ministry of Defence has confirmed that the British soldiers will not be involved in any combat situations.

The town of Sangin was the scene of fierce fighting during the Afghan campaign, with more than 100 British troops dying in and around the town.

From the start of operations in October 2001, 456 British forces personnel or MoD civilians were killed while serving in Afghanistan.
Instability in the country has raised the question of whether the UK should increase its military support.

But Lord Dannatt, former chief of the general staff, told the BBC Radio 4 Today programme that the Government will have to think ‘long and hard’ about any expansion of the UK’s role.

The former head of the British Army said: ‘I think the Government has a strategic choice that it is going to have to think long and hard about.

‘We have limited resources, particularly after the army was cut by 20%.

‘Are we going to make a bigger effort into Afghanistan again?

‘Are we going to hold ourselves in reserve to go in to Syria, if that totally implodes?

‘Or, if there is some form of government in Libya that we can support, are we going to make a deployment into Libya?’

Lord Dannatt said all these things relate to the same problem of the ‘growth of the so-called Islamic State-type jihadi influence’.

‘We can’t do all of those things – the Government has got to decide what its priority is. Something, however, must be done.’

But Lord Dannatt said Afghanistan is currently a ‘lower priority’ than Libya and Syria.

The Times reported that the latest deployment included at least one SAS unit of around 30 soldiers who were backing American special forces and the Afghan National Army as they try to retake Sangin, in Helmand province, from the Taliban.

The MoD refused to comment on any operations involving the SAS.

A spokeswoman said: ‘As part of the UK’s ongoing contribution to Nato’s Resolute Support Mission, a small number of UK personnel have deployed to Camp Shorabak in Helmand province in an advisory role.

‘These personnel are part of a larger Nato team which is providing advice to the Afghan National Army. They are not deployed in a combat role and will not deploy outside the camp.

‘In total the UK has around 450 troops in Afghanistan mentoring and supporting the Afghan National Defence and Security Forces and the Afghan Security Ministries.’

General Lord Richards of Herstmonceux, a former Nato commander in Afghanistan, told the newspaper that Britain and its allies should be prepared to increase the number of support troops in the country if needed.

He said: ‘It is important that the West honours its commitment to protect the Afghan people as well as the memory of those who fought and died there to keep us safe from extremism.’