You are here: Home / Europe / British soldiers could be sent to Syria 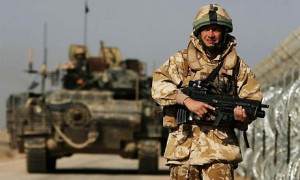 He called on the United Nations to set up safe havens in the country for people forced out of their homes by the ongoing civil war.

And he said the UK should be willing to put troops on the ground to defend them, if needed.

Mr Mitchell, the MP for Sutton Coldfield, is a former Secretary of State for International Development.

Speaking to the BBC, he said: “Ideally Britain would not be involved in putting troops on the ground but we should be willing to consider that.

“And bear in mind this is not the offensive action by troops that people in Britain sometimes recoil from, it is a defensive action.”

Refugees would be housed in enclaves which would be authorised by the United Nations, giving troops guarding them a right to defend themselves, Mr Mitchell said.

“We would be talking about an international body hopefully composed of troops from Jordan and Egypt and other countries in the region willing to shoulder the burden.

Mr Mitchell said he hoped Syrian President Bashar al-Assad would accept the need for foreign troops to come to his country to defend refugees because he had seen “the hundreds of thousands of his countrymen who are being killed and displaced.”

He added: “We have a responsibility to protect these people.

“We’ve seen the reaction to the appalling suffering and photographs that appeared last week.

“Those photographs could have taken place on any single day alongside the Mediterranean over the last three years.”

George Osborne, the Chancellor, confirmed over the weekend that the Government wanted to stage another vote in Parliament on extending air strikes from Iraq to Syria. MPs previously rejected action in a similar vote in 2013.

The Chancellor stressed that vote would only happen if ministers were confident they had “support across the House of Commons for this action”.

He said: “Before any further military action in Syria is even contemplated, the UK should now lead in setting up an urgent summit on Syria and the region involving the EU, the US and especially neighbouring States to discuss a coordinated humanitarian response to the refugee crisis and how we secure peace. “

And fellow leadership contender Yvette Cooper said David Cameron must explain how the UK joining military action in Syria will help the situation if he wants to secure Labour support.