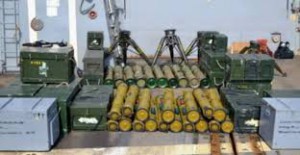 A British research group has suggested that arms shipments that were intercepted en route to Houthi rebels in Yemen this year were likely sent with the complicity of the Iranian regime, Reuters reported Tuesday.

A report recently released by Conflict Armament Research found that two of the three smuggling ships seized by Western navies in the Arabian Sea, which contained arms matching those taken from Houthi insurgents, were manufactured by the Iranian shipbuilding company Al Mansoor. According to state records, Al Mansoor is located next to a base of Iran’s Islamic Revolutionary Guard Corps (IRGC).

“Since 2012, Al Mansoor dhows have been involved in multiple cases of trafficking in heroin, cannabis, and more recently, weapons,” the report noted. “Analysis of the weapons suggests that at least two of the three deliveries were probably supplied with the complicity of Iranian security forces.”

The serial numbers on several of the arms shipments were sequential, suggesting that they came from a national stockpile, according to the report. The lot numbers of anti-tank weapons found aboard one of the intercepted boats also matched the production run of similar weapons that United Arab Emirate forces said they captured from the Houthis.

The report further pointed to Somali ports as an important drop-off point in the smuggling operation, and said that the warships HMAS Darwin, FS Provence, and USS Sirocco had captured more than 4,500 rifles, mortars, machine guns, and rocket launchers in a four week period between February and March of this year.

“CAR’s analysis of the seized materiel … suggests the existence of a weapon pipeline extending from Iran to Somalia and Yemen, which involves the transfer, by dhow, of significant quantities of Iranian-manufactured weapons and weapons that plausibly derive from Iranian stockpiles,” the report noted.

“This report provides evidence suggesting Iran is playing a hand in supplying weapons to the conflict in Yemen,” said Jonah Leff, director of operations for the arms research group.

While an Iranian official contacted by Reuters denied any involvement in the smuggling operation to the Houthis, a senior Iranian diplomat told Reuters in October that there has been a “sharp surge in Iran’s help to the Houthis in Yemen” since May, referring to weapons, funds, and training, according to the news agency. “The nuclear deal gave Iran an upper hand in its rivalry with Saudi Arabia, but it needs to be preserved,” the diplomat elaborated.

Abdallah Jama Sallah, a former Somalia-based anti-piracy official, told Reuters that efforts to prevent Iranian smuggling are nearly futile. “In 2015, our own forces reported 160 Iranian boats fishing in our seas without permission. There’s no way of verifying them,” he explained. “There’s lots of weapons going back and forth, it’s absolutely impossible to control that sea.”

Vice Admiral Kevin Donegan, the commander of the U.S. Fifth Fleet, which operates in the Middle East, said in October that five Iranian arms smuggling shipments have been intercepted by U.S. and allied naval forces since April 2015.

In April 2015, former State Department official Aaron David Miller warned that the nuclear deal would embolden Iran and that “we are and will be enabling its rise in the region because of this nuclear diplomacy, not constraining it.”

In addition to its stepped up role in Yemen, Iran-backed militias are bolstering Tehran’s influence in Iraq while Iran-backed forces in Aleppo are key to the Syrian regime’s effort to capture that city.