You are here: Home / Europe / British radical Muslim cleric: I would love to go and live in the Islamic State 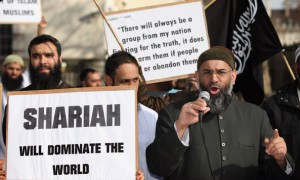 Anjem Choudary knows his lines. He is candid about that. Sitting in a relatively smart café in Ilford, Essex, where the waiting staff know his name, he recounts his various TV experiences and waxes lyrical about the view from Canary Wharf, where he recently filmed an interview.

‘I don’t think there is a question you could ask that I haven’t answered 50 or 100 times,’ he says, sitting in a high-quality dark blue thwab, or robe, with a neatly trimmed greying beard and a pungent smell of aftershave.

This is jihadi public relations. Lesson one: Give them what they want.

‘I would love to go and live there,’ he says of the Islamic State, ‘if the British government would give me back my passport. People are flocking to the Islamic State, people are loving it there. You can see the parties in the streets in Raqqa and Ramadi.’

There’s the headline: British cleric says he wants to join the Islamic State. And, of course, it is doubly effective since a huge majority of people in Britain would arguably love it if Choudary packed his bags for Syria.

This is a man who has publicly ridiculed dead British soldiers, has praised Islamic State (IS) and al-Qaeda, and has defended crucifixion and stoning to death.

A former lawyer, Choudary has said he wants to see Sharia law in the UK, his various Islamist movements have been systematically banned by the government, while he was once open about supporting British Muslims who want to go and fight for Islam in foreign climes (before the 2000 Terrorism Act made that illegal).

He believes the latest raft of counter-terrorism legislation being mooted by the Home Secretary is aimed squarely at him. ‘Theresa May was dying to say my name on Radio 4,’ he said.

But the police have his passport as part of bail conditions (he was arrested recently on suspicion of belonging to an illegal organisation), so Choudary is, for now, immune from having to make good on his pledge to leave his Essex home for the Islamic caliphate.

The question, of course, is why he never went before – for over a decade, wars against the soldiers and the state he claims to hate have wracked the Middle East. What was holding him back then?

‘I believe you can support your brothers and sisters verbally and financially. If I really believed it was an ideological obligation to travel abroad and wage jihad, I would do it. I had many opportunities,’ he says, quoting the Quran and the Prophet Mohammed’s demand to fight the infidels with both your body and your tongue.

The father of four is less rehearsed when asked about his children. He has said he actively supports Britons like the three teenage girls who left the UK for Syria in February. Why wouldn’t they want to go and live in an Islamic State? But what if it was his one of his daughters – how would he feel then?

‘I wouldn’t have a problem if my family wanted to go,’ he says, and rattles off a few more lines about the inherent attractions of Sharia law – one of which is not having to see ‘scantily clad women on billboards’.

Later, he talks glowingly of his son (‘An A-star student’, he says) – so what if his 17-year-old, his eldest, wanted to go and fight for IS?

He stiffens. ‘It is difficult to deal with hypotheticals. Once I start saying “Oh yeah, my son should go and fight”, then Social Services are going to be down here.’

But back to the lessons. It is not just giving them what they want, it is generating heat. That is why Choudary appears on Fox News opposite Pamela Geller, the virulently anti-Muslim polemicist, in a joint interview with Fox anchor Sean Hannity.

Choudary is an educated, eloquent and even persuasive speaker who knows his own brand of fundamentalist Islam well. He is approachable and engaging. His eyes light up when he talks about his children.

So why, instead of espousing hate and giving the far right and other elements in Britain fuel for their Islamophobic crusade, does he not use those skills for good? After all, you cannot incite hatred of Muslims and then complain that it exists, can you?

‘The thing with the media is that they are not interested in that. They are interested in soundbites. The Sun and the Daily Mail are the most popular newspapers,’ he says.

‘We’ve done quite a long interview and you and I know that you’ll print those aspects that you think are worthy of public consumption and you will propagate – whether you like it or not – those very same misconceptions. The way I look at it, you have to quote in order to attack.’

Does he not think that he courts controversy? ‘Of course,’ he says. He claims that within the Muslim community in Britain, he is well liked. He claims to have been able to count on one hand the number of times anyone has stopped him in the street and criticised him for the abusive and insulting things that he has made his career saying.

He likes to present himself as a campaigner, someone who opposes laws that threaten to close down radical mosques and jail those who return from Syria and Iraq. He claims that, despite a common perception otherwise, he never condoned the attacks on 11 September in New York or on 7 July in London, he simply said he understood why they had happened and did not believe they were un-Islamic.

‘I didn’t condone them. What I did is say

that they had juristic justification. There are people that justify them on the divine text. I can’t say that they don’t have justification because they quote the same verses in the hadith – but they understand them differently,’ he says.

‘For me to say that they have no justification would be insincere. I can say that I don’t believe that it is the strongest opinion. If people followed what I say, they wouldn’t do things like that. I’ve made my point clear.’

We talk about the horrific videos that have been published by IS of beheadings and murders; does he not feel disgusted when he watches them? Wouldn’t that be a human reaction?

He says that as human beings, we have become too sensitive to violence. But Choudary has never been to a war zone, never seen violence up close.

He condones capital punishment, saying that it enforces the rule of law, but would he be able to enforce it if he was holding the knife?

Google Choudary’s name and you will see a different side of the infamous preacher who battles against TV pundits and tweets his support for IS to his near 30,000 Twitter followers. Pictures abound of “Andy” Choudary, the University of Southampton student who was, by most accounts, a bit of a party animal. He says he is not ashamed of his past, pointing out most people make mistakes, that it has made him a more devoted Muslim.

As we finish, Choudary begins talking about his father, a Pakistani stallholder who traded at Deptford market in south-east London in the 1980s and 1990s. He speaks warmly of escorting his father to work every day bar one, when he was busy and so his mother accompanied him instead. That day, his father dropped dead right there in the middle of the market. The guard is down, but only momentarily.

Then he is off again. The well-rehearsed rhetoric flows smoothly. Choudary is back to being the radical.