You are here: Home / Europe / British Muslims urged to do more to dismantle Islamic State’s appeal 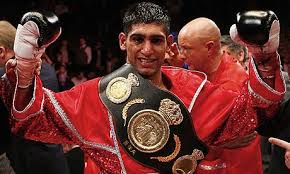 The boxer Amir Khan has urged Britain’s Muslim community to do more to confront the propaganda of Daesh, which has persuaded hundreds of young Britons to travel to Syria and Iraq, wrote GulfNews.

The Bolton-born boxer said there was a need for more public denunciations of Daesh, and warned that otherwise Muslims throughout the UK risked being tarred with the same brush.

“It’s a very sensitive thing to talk about,” said Khan, “but I think we have to be brave about this. What’s happening gives us all a bad name. It’s why it’s so important to stand up and be counted.”

The former two-times world light welterweight champion also attacked Daesh for “brainwashing” the young and vulnerable. Details emerged last week of more Britons who have travelled to Syria to fight for Daesh or other Islamist groups, bringing the estimated total so far to 600. Hassan Munshi and Talha Asmal, both 17 years old and described as two “ordinary Yorkshire lads”, are thought to have entered northern Syria to join Daesh after boarding a holiday flight to Turkey on March 31.

Khan knows of no one from Bolton who has gone to fight in Iraq or Syria, although nine people from Rochdale, 20km away, were recently arrested on the Turkish-Syrian border, prompting a Lancashire imam to warn that the “tentacles of [Daesh]” were spreading through the area’s Muslim community.

Khan, 28, a proud and devout Muslim, said: “People are brainwashing them. Kids don’t grow up thinking about going out and killing innocent people. It’s why I go to schools and tell them: ‘Look, you want to follow the right path. You want to represent your country in a good way’. Obviously innocent people shouldn’t be killed. Obviously this is wrong.”

His stance against extremism prompted him to travel to Pakistan last December and visit a school where the country’s Taliban killed 132 children.

“People said it wasn’t safe to go, but kids are being killed and we wanted to show support. What sick people could do that? You could see the bullet holes in the floor and you could still see bloodstains everywhere,” said Khan.

On the rise of Ukip, the boxer describes himself as “more British” than Nigel Farage’s party. He also denies ever experiencing racism in Bolton, despite Ukip garnering considerable support in the town which, during last May’s local elections, saw the party secure its first councillors in Greater Manchester.

“I’ve got nothing but a lot of love here from a lot of people. But maybe it’s because I’m probably more British than Ukip are because I represented the country in the Olympic games. I also fight for the country and I’ve won medals and titles for the UK. So I’m more British than them. So maybe when they see me they recognise that.”

His international fame has not meant that Khan has managed to sidestep the global security checks that have developed in response to extremism. He describes how he was taken aside by immigration officials “for hours at a time” every time he visited America.

He eventually raised it with the former US secretary of state, Hillary Clinton at an event in Washington. Since then, he has never been stopped when entering the US. He also talks about how his US visa was once revoked at Heathrow airport. “I had a fight in two days’ time and I had to get there, so I rang David Cameron and he said: ‘Look, leave it with me.’ And he sorted it out.”