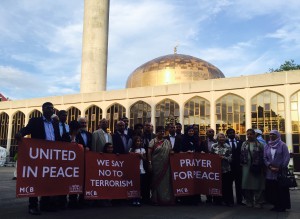 The Muslim Council of Britain (MCB), which represents 500 charities, schools and mosques, is creating a scheme which aims to quash terrorist narratives from developing within communities.

The group set up the initiative in direct competition to the Home Office’s anti-radicalisation scheme, Prevent, which they insist imposes a strong western government ideology and foreign policy, rather than simply discouraging terrorism and violence.

A source close to the group said MCB’s scheme would not seek to water down Islamic ideology and would use speakers more likely to be aligned to the values of Muslims.

The source told The Guardian: “If we can get these voices more heard, they are anti-government and therefore more credible in saying do not turn to violence.

“In reflecting the wishes of a cross-section of British Muslim society, our affiliates have directed the MCB to explore a grassroots-led response to the challenge of terrorism. Real challenges exists, as we see with Muslim families broken up as a number of children, mothers and fathers leave to travel to Syria.”

The source added: “The approach of the government is wrong and ineffective and not engaging with local communities, and does not have community support”, stating the aim is to “tackle the… issue of Daesh within our communities, which splits up families.”

A key goal of the group is to deter young British Muslims from leaving for Syria.

The MI5 currently estimates that 3,000 people in Britain may pose a terrorist threat and that more than 850 have travelled to Syria and Iraq to join Isis.

The MCB scheme will be run from mosques and is expected to include community leaders, former police officers and mental health professionals.

The programme is likely to attract some of the 8,000 young people who signed up to the Government’s Prevent scheme from April 2015 to April 2016.

He said: “Any strategy aimed at safeguarding and supporting vulnerable individuals from a range of harms is surely a concept we can all agree on. Prevent is about protecting people from exploitation and harming themselves and others.”

But former Metropolitan Police chief superintendent Dal Babu said: “Having Muslims pass through subjective and discriminatory counter-extremism litmus tests as a condition of engagement only re-enforces the terrorist narrative.

“The Prevent strategy exacerbates this problem and it is quite clear that it does not currently have the support of many among Muslim communities across the UK, yet the threat of terrorism is real and severe.”