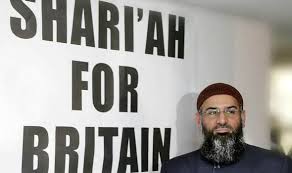 A high-profile Muslim cleric in the UK has been charged with promoting the cause of Islamic State through a series of online lectures in which he and another man, Mohammed Rahman, praised the group and its leader Abu Bakr al-Baghdadi.

The two men entered not-guilty pleas at Westminster magistrate court on Wednesday, 5th August. Choudary, representing himself, told the court, “I plead that Cameron and the police are guilty and the only people who are innocent are me and Mr Rahman.”

Choudary is well known for self-promotion, but is widely regarded by the British Muslim community as a fraud who has little formal education in Islam.

He dropped out of a medical degree at university after one year, where he was known as a hard drinking student called Andy. He subsequently completed a law degree and went on to become the Chairman of the Society of Muslim Lawyers in the UK. He no longer practices law, and lives on social welfare in London.

In a recent interview he expressed his desire to join Islamic State (IS), “I would love to go and live there if the British government would give back my passport. People are flocking to the Islamic State… people are loving it there. You can see the parties in the streets in Raqqa and Ramadi.”

Choudary has formed several Islamist groups in the UK that have been banned, notably al-Muhajiroun, al Ghurabaa and Islam4UK.

In a statement before the court appearance, Sue Hemming, head of special crime and counter-terrorism at the Crown Prosecution Service (CPS) said, “Following an investigation by the Metropolitan police’s counter-terrorism command, we have today authorised charges against Anjem Choudary and Mohammed Mizanur Rahman.

“We have concluded that there is sufficient evidence and it is in the public interest to prosecute Anjem Choudary and Mohammed Rahman for inviting support for Isil, a proscribed terrorist organisation, between 29 June 2014 and 6 March this year. Each man is charged with one offence contrary to section 12 of the Terrorism Act 2000.

“It is alleged that Anjem Choudary and Mohammed Rahman invited support for Isis in individual lectures which were subsequently published online.”

Choudary and Rahman were remanded in custody, with an Old Bailey trial set for 28th August.