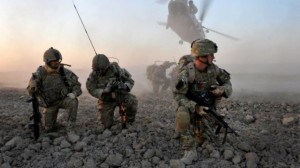 A 6,000-strong training mission led by Italy to Libya will see Britain sending in 1,000 troops, including the Special Air Service.

The plan is at the stage of examining how to send soldiers to help train Libyan security forces to fight terrorist taking over some region of the country.

The security vacuum in Libya has allowed ISIS to expand its so-called caliphate to the country.

Under plans being looked at, British military personnel would contribute to a 6,000-strong Italian-led mission to train and support local forces.

The deployment would mean boots on the ground in an area where six SAS men were captured during an operation in 2011, months before the death of Libyan Dictator Colonel Gaddafi.

Reported by RT Arabic, Ahmed Gaddafi Al-Dam – reported to be a cousin of former Libyan dictator Muammar Gaddafi – claimed that IS militants have managed to steal chemical weapons from underground storage facilities in Libya that were not properly guarded and the gas has already been used.

“There are two known cases of this chemical agent being stolen. I know this from my sources in Tripoli. In the first case, seven drums of sarin were stolen, and in the second, I think it was five,” RT reports.