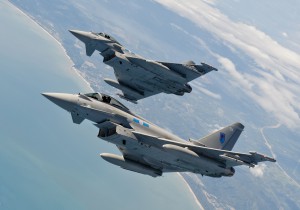 The Royal Air Force(RAF) is reportedly already flying missions over Libya even prior to any invitation from the Libyan Government of National Accord(GNA) whose term has not even started.

Before the term of the Government of National Accord begins it has to gain a vote of confidence from the internationally-recognized House of Representatives(HoR) in Tobruk. The last proposed government was rejected as being too large. The HoR gave the GNA ten days to come up with a new list but that deadline has passed. The deadline now is February 14th.Many foreign nations are planning for military intervention but are waiting for the GNA to ask them in to grant them legitimacy. Those waiting include the United States which wants to launch a third front against the Islamic State in Libya in addition to those in Iraq and Syria.The report on the RAF sorties comes from Tobias Ellwood, the foreign office minister who said the flights are to prepare for a possible invitation to intervene by the yet to be established Government of National Accord.
Just recently the Egyptian foreign minister has warned against foreign intervention before the GNA is formed and makes a request. The African Union has expressed a similar view. Ellwood said that UK troops would not go to Libya to fight the Islamic State themselves but could help train the Libyan army on the invitation of the GNA. Ellwood refused to give any details on the UK sorties or whether they involved drones. Elmwood claimed there were less than 5,000 Islamic State supporters in Libya. Elmwood admitted what many analysts overlook and that is that the threat from the Islamic State is not as great a priority to be addressed for Libyan factions as for many western nations. The IS threat he said was not spurring rival factions to come to an agreement. Indeed, it is foreign powers with the aid of the UN that are pressuring Libyans to act and so far to no avail. Labour Party head, Jeremy Corbyn, has written to Prime Minister David Cameron insisting that he should get approval from the parliament for any military action in Libya. There is already ample evidence that Special Forces from several countries are operating in Libya.As well as the RAF sorties that are presumably simply for surveillance, there have been a number of bombings by unidentified aircraft of the city of Derna.
The city is held by a group of jihadists the Derna Shura Council who are battling the Islamic State near the city and nearby mountains. Recently a hospital was hit and damaged and there were civilian casualties. There seems to be little press interest in finding out who carried out these attacks which far from damaging the Islamic State harms the groups who drove them out of Derna. These attacks and the surveillance missions of the RAF surely violate Libya’s sovereignty. Turkey shot down a Russian plane just for violating its airspace without any aggressive actions.The Islamic State is preparing for bombing and other attacks both by fortifying their main base in Sirte but also by sending fighters to the south to who knows where. Reuters claims: Groups of Islamic State fighters are quitting their bases in Libya fearing Western air strikes and heading south, posing a new threat to countries in Africa’s Sahel region including Niger and Chad, officials and intelligence sources said. The west may concentrate on trying to retake Sirte and the adjacent areas while most Islamic State fighters may be already spread out thinly throughout Niger, Chad, and elsewhere creating havoc.
digitaljournal.com