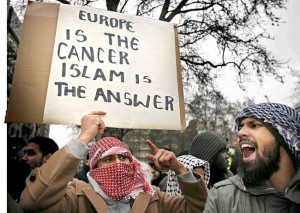 British daily, The Independent, reported that the former Mayor of London said at the conference: “The simple fact is, the West doesn’t face a threat from Russia…We now face a threat from Muslim fundamentalism. Most of which has been funded by Saudi Arabia, our principal ally, which has funded the most intolerant strand of Islam which bears no relation to the teaching of the Prophet Mohammed.”

“The right thing isn’t being done, almost all Muslim fundamentalism has been funded by the Saudis and the Qataris, going back 70 years, spreading a particularly hate-filled Wahabi strand of Islam and Britain and America should be saying to them ‘You’ve got to stop funding this or you cannot be our ally’.”

The left-centre former politician added that a broader coalition is needed for the international community to successfully combat Muslim terrorism. “We need a broad coalition. The West is discredited after the fiasco over the wars in Afghanistan and Iraq. We need to bring in not just Russia and Iran but China, Nigeria and Brazil as well. It needs to be the world standing together. That’s what the UN was created for.”

Livingstone also said in his speech that British media are holding an anti-Russian stand not reporting about “the discrimination against Russian-speaking people in the Baltic States.”

In addition, he also said that the EU has a share of responsibility in the Ukrainian political crisis, which caused the civil war.

“No one is told that it was actually pressure from the EU that insisted to the then Ukrainian president that they wouldn’t sign a trade deal unless they stopped negotiating a trade deal with Russia, and then when the president decided that he wouldn’t do that, oddly enough he was overthrown,” the former MP said.