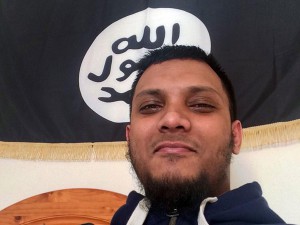 A British jihadist convicted of plotting attacks against military bases had made a chilling video called “Isis drives around Westminster”, it has emerged.

The Crown Prosecution Service said a leaflet entitled “Terrorists or terrorised”, a book called “Guide to the Islamic State” and the group’s flags were found at their home.

Junead, 25, was found guilty of preparing for acts of terrorism and planning to join Isis in Syria at Kingston Crown Court on Friday and faces life in prison.

Shazib, 23, was also convicted of planning to fight for Isis in Syria and awaits sentencing alongside him in May.

The jury heard that the pair made plans to travel to the so-called Islamic State between August 2014 and July last year but that Junead changed his mind and shifted his focus of domestic attacks.

While using his job with a pharmaceutical firm as cover to scout United States Air Force bases in East Anglia, he exchanged online messages with an Isis fighter in Syria on how best to launch an atrocity.

The messages sent to “Abu Hussain”, believed to be British hacker Junaid Hussain, showed them discussing the possibility of faking a road accident before attacking passers-by and comparing the plot to the murder of Lee Rigby.

Hussain claimed he could pass Junead addresses of British soldiers, but added: “Most soldiers live in bases which are protected. I suppose on the road is the best idea. Or if you want akhi (brother) I can tell u how to make a bomb (sic).”

After he was killed by a US drone strike in August, David Cameron said he was recruiting sympathisers to “orchestrate barbaric attacks against the West” including unspecified plots in the UK last summer.

After Junead’s arrest, police found pictures on his phone of him posing in his bedroom with an Isis-style black flag later found in the attic.

His computer was found to contain an al-Qaeda bomb manual and Amazon searches for a large combat knife, alongside graphic propaganda and execution videos.

Commander Dean Haydon, the head of Scotland Yard’s SO15 counter-terrorism unit, said specialist officers had reached out” to Junead, of Luton, a year before his arrest.

“They offered to help him follow a positive life path. Junead Khan’s refusal spiralled into extremism and plotting acts of terrorism,” he added.

Detectives trawled through approximately 66,000 text messages, social media messages and emails to piece together how the Khans planned to travel to Syria.

The pair spoke of “jihad” training and in one message to an unidentified person, Shazib talked of becoming a martyr: “I’ve always had that dream to become shaheed [Muslim martyr] on the path of Allah.”

Sue Hemming, of the Crown Prosecution Service, said they were “supporting terrorism” and had spent a significant amount of time planning how to join Isis.

“Through early detection and prosecution of these individuals more serious crimes have been avoided which could have had devastating consequences in the UK or Syria,” she added.

Judge Mr Justice Edis remanded the men in custody ahead of sentencing on 13 May.