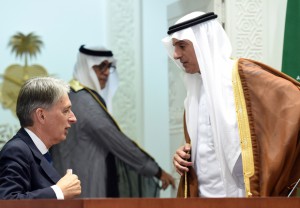 The UK’s foreign secretary has confirmed that British military personnel were aiding the Saudi-led coalition in Yemen in choosing targets for air strikes, though they reported no “deliberate” breaches of humanitarian law.

“I can’t tell you whether it is six people but we do have a military presence in Saudi Arabia and we are working with the Saudi Arabians to ensure the following of correct procedures to avoid breaches of international humanitarian law,” he said in response to a question from the shadow foreign secretary Hilary Benn.

“And it’s very important that we ensure Saudi Arabia has that capability,” he added.

Human rights groups have slammed the UK’s alliance with Saudi Arabia following reports that Saudi planes had carried out air strikes on Doctors Without Borders (MSF) hospitals in Taiz and Sadaa, the latter a stronghold of the Houthi rebels.

MSF director of operations Raquel Ayora denounced the latest strike on an MSF hospital on Monday and repeated that the organisation constantly shares the coordinates of its facilities with those fighting in Yemen.

“There is no way that anyone with the capacity to carry out an air strike or launch a rocket would not have known” that the clinic was a functioning health facility supported by MSF, Ayora said.

“We strongly condemn this incident that confirms a worrying pattern of attacks to essential medical services and express our strongest outrage as this will leave a very fragile population without healthcare for weeks,” said Ayora.

“Once more it is civilians that bear the brunt of this war,” she added.

Though it is as of yet unconfirmed whether Monday’s strike was by the Saudis or from a rocket on the ground, the reports so far have already led to calls for the UK to halt arms licenses to the kingdom.

“In the light of these reports and given that the government’s own policy is not to grant arms licences ‘if there is a clear risk that the items might be used in the commission of a serious violation of international law’, will you now launch an immediate review of arms exports licences to Saudi Arabia relating to the use of British supplied weapons?” Benn asked the foreign secretary in the House of Commons.

Previous inquiries as to the extent of UK involvement in the Saudi campaign, which officially seeks to restore the government of ousted President Abd Rabbuh Mansour Hadi and eliminate the Iran-allied Houthi militia, have received mixed answers.

In July, in response to questioning, Minister of State for the Armed Forces Penny Mordaunt said that while there were “liaison personnel” working at the “Saudi and coalition air and maritime headquarters,” she added that “none of these personnel are participating directly in Saudi military operations.”

Over 6,000 people have died since the beginning of Saudi air operations in March.

More than 80 percent of Yemen’s 21 million-strong population are believed to be in need of aid, according to the UN.