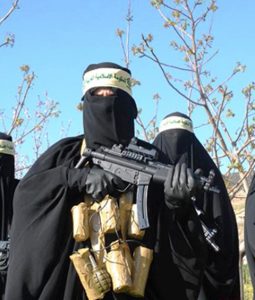 The defence secretary, Gavin Williamson, has announced that Britain’s first specialist army training team is being set up to help tackle sexual violence and the use of female suicide bombers in some of the world’s most dangerous countries, like reported by theguardian.com.

The expert unit will be deployed in the coming weeks to east Africa where the Islamist terror group Al-Shabaab has launched brutal attacks on the civilian population and military peacekeepers have sometimes struggled with local cultural sensitivities.

The team, which will include female British soldiers, will work on helping local forces understand that, while child soldiers may pose a threat, they are victims of any conflict and have rights, including the chance of a normal life.

At first it will operate in Somalia, Ethiopia and Kenya, which the minister visited last week to see training taking place, but could later expand to Nigeria to help tackle Islamist militants Boko Haram, which has kidnapped hundreds of girls.

“Women will talk to women and the [peacekeepers] have been finding a lot more information in Somalia about what is going on in the local community and how organisations such as Al-Shabaab are operating.

“Those women are often in quite conservative, traditional communities, so it’s a massive upside in terms of security because it gives [armed forces] the ability to identify, relate to and speak with communities that they wouldn’t in the past have been able to … Anecdotally there’s an awful lot of intelligence that comes out of this which is absolutely vital in terms of dealing with those threats.”

The plan has echoes of the preventing sexual violence initiative promoted by the former British foreign secretary William Hague and Hollywood star Angelina Jolie, which promised support for victims and help to end the culture of impunity.

There was alarm earlier this year when it emerged the Foreign Office team of 74 experts, including lawyers and psychologists who could be sent promptly to conflict-hit areas, had been halved, while funding had been cut by 10%.

Williamson said: “Hague shone a light on these issues like no other politician has in the past. The government has been continuing to do this work, but this is about how we can use the armed forces to really take this to the next level.”

The Ministry of Defence team comprises a handful of military personnel who will initially instruct 230 military trainers, with the hope that they in turn will train at least 100 peacekeepers each. The mission could be expanded outside Africa if successful.

Hundreds of soldiers from at least 12 nations have already received training on issues including gender and security from British forces on the continent.

One of the team’s key aims is to install a woman on every peacekeeping unit, both to boost the confidence of local women, but also to help conduct searches. Al-Shabaab and Boko Haram both use female suicide bombers.

“Women, and even children, are increasingly being used as suicide bombers, so it’s not only to get intelligence, but it’s also to search people, so having a woman as part of the patrol gives the ability to [do that],” Williamson said.

Many victims of sexual violence in conflict zones have been targeted on market day or while collecting water, when they are at their most vulnerable. The MoD team may suggest peacekeepers change their patrolling patterns and receive training on how to deal sensitively with women who have been raped or abused.

The defence secretary vowed to increase the UK’s focus on helping child soldiers in Africa. Militants often bring very young children into their organisations in Nigeria, Somalia, the Democratic Republic of the Congo and elsewhere.

“These are little children that aren’t joining because of ideology, they’re literally being forced by the evil terrorist groups to join up and be part of this conflict,” he said. “It’s really important to give those peacekeepers the opportunity to deal with these young people, to understand how best to do that. [We can] train them to give them education and skills so hopefully we can maybe give them a childhood back, give them the opportunity to have a normal life.”

Williamson acknowledged that the training team could not, on its own, challenge entrenched cultural attitudes towards women. “I’m not so naive as to think that on its own Britain could be the nation that changes all of this,” he said. “[There’s] a suggestion that because it’s tough, we shouldn’t try. The more we get every nation talking about it, the better chance we have of making change.”

He insisted the unit would be sensitive to local culture. “In every country we operate in, we look at how we tailor our approach. It isn’t about lecturing people, it’s about sharing information and knowledge and the fact that, by doing this, it will help them do the job and stay safe.”

He said British forces would use their own high standards of conduct to help drive up behaviour in other armies. A Channel 4 documentary last week exposed the culture of impunity among UN peacekeepers, who have been accused of 1,700 crimes of sexual violence, with just 53 jailed.

“Obviously what we’re teaching the world are the things that we actually teach ourselves in terms of people going into conflict zones,” Williamson said. “We’ve had extensive experience. At the end of the day, unless you’re having that training and understand it yourselves, you can’t really train others.”