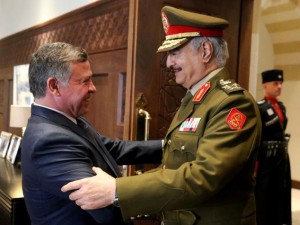 The British Ambassador to Libya, Peter Millett, has said his country is not against Khalifa Haftar getting a leadership upper hand in a united military command under a civilian authority.

In a TV interview on Libya Channel, Millett said the UK and the international community are ready to sanction all those who are getting in the way of the peaceful political transition, adding that the UN and the international community both agree on supporting only the Libyan Political Agreement that was signed in Skhirat, Morocco, on December 17.

“Britain will maintain its support for the Libyan people and the internationally recognized Government of National Accord (GNA) so that peace and stability can be achieved in Libya.” Millett indicated.

“Only Libyans have the irrevocable solution for their ordeal and they know that there isn’t a better choice than the political agreement they brokered in Morocco last year as it was reached after long dialogue between the Libyans themselves.” The British Ambassador continued.

He also said that the national unity and accord among all Libyans is the most powerful weapon for Libyans to fight terrorism and avoid separation of the country’s regions.

“Our embassy staff are visiting Libya every week and we are looking into the security situation and preparations before we reopen our embassy in the capital.” Millett told Libya Channel.