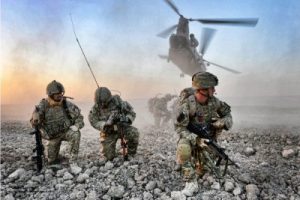 Britain’s Special Air Forces, next to the Washington-led international coalition forces, actively participated in a military effort to seize the Tabqa dam and airbase in Syria, like reported by aawsat.com.

Britain’s ‘Mail On Sunday,’ wrote that the Special Air Service (SAS) has launched a series of devastating aerial assaults behind ISIS lines – claiming a decisive victory over the terrorist group and paving the way for a final battle to wipe out the terrorists in their stronghold.

The top-secret raids have secured a strategically vital air base in Syria from which Britain and its allies can attack the nearby city of Raqqa, where an army of terrorists are preparing to fight to the death.

Believed to be the first airborne infantry operation against ISIS, it began with British Special Forces parachuting from thousands of feet under cover of darkness on a reconnaissance mission deep in enemy territory.

The squad of elite SAS troops (whose exact number cannot be disclosed for national security reasons) jumped from a C-130 Hercules military aircraft and steered their parachutes towards a desert area west of Raqqa, where the Tabqa dam and Tabqa airbase are located, the newspaper added.

They watched the terrorists at close range for several hours using night-vision goggles and identified the enemy’s strengths and weaknesses. This vital intelligence enabled the coalition against ISIS to finalize plans for the assaults days later on the two key strategic targets.
A few days later, SAS and SDF troops were airlifted towards Tabqa air base, located near Raqqa.

The SAS and SDF landed south of the base and launched a ground attack supported by Apache helicopter gunships which fired 30mm cannons and Hellfire missiles at enemy defensive positions identified by the SAS reconnaissance team.

The mission ended in victory, allowing the air base to be used as a launchpad for imminent operations against an estimated 4,000 ISIS hardliners in Raqqa.

Following the raids on the dam and the air base, US military spokesmen heaped praises on the SDF, as part of a coalition strategy to enhance the reputation of local forces.

“It is the SDF on the ground putting their lives at risk and valiantly engaging the enemy. It is the SDF who are making the sacrifices so that other coalition nations do not continue to suffer the threat of ISIS terrorism inside their own borders,” the newspaper cited US Colonel Joseph Scrocca as saying.

The top-secret role of the SAS and other international Special Forces troops was confirmed, however, by British and US sources, including a news website run by former American military personnel called Lima Charlie News.

While the Tabqa dam has been largely wrested from the terrorists, its far southern end remains in ISIS hands.

Although the threat has been minimized, there are still fears that in a desperate last effort to halt Western forces, the extremists could destroy the dam, a move that would flood the river valley and cause thousands of deaths. ISIS may also have stockpiled poisons which it could use to contaminate the water supply.

A Ministry of Defense spokesman said: ‘We do not comment on Special Forces.’