You are here: Home / Africa / Britain to send Chinook helicopters and up to 100 troops to Mali 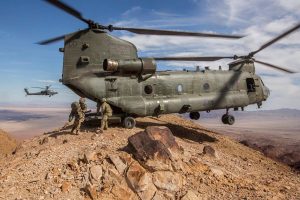 Britain will launch a new military mission in Africa with the French because of fears Islamic State cells wiped out in countries such as Libya are re-forming with Al-Qaeda to plot attacks in Europe, like reported by dailymail.co.uk.

The Prime Minister will send three Chinook helicopters, including up to 100 troops, to Mali, to help French forces as they combat extremism in the ‘ungoverned spaces’ in the region.

Theresa May will use a summit with French President Emmanuel Macron today at Sandhurst military academy to announce a new era of greater cross-Channel security co-operation.

Britain’s three spy chiefs from MI5, MI6, GCHQ and France’s two intelligence chiefs met in advance of the summit in the UK to discuss tackling terror.

This was the first time ever that the five intelligence chiefs were brought together in a single meeting and comes as the PM tries to persuade the French to give Britain a trade deal.

The PM said: ‘Today’s summit will underline that we remain committed to defending our people and upholding our values as liberal democracies in the face of any threat, whether at home or abroad.

‘But our friendship has always gone far beyond defence and security and the scope of today’s discussions represents its broad and unique nature.’

She added: ‘And while this Summit takes place as the UK prepares to leave the EU, this does not mean that the UK is leaving Europe.

‘What is clear from the discussions we will have today is that a strong relationship between our two countries is in the UK, France and Europe’s interests, both now and into the future.’

French forces have been battling extremists in North Africa since 2014, with 3,000 currently involved in the anti-insurgent Operation Barkhane across the Sahel region.

Outlining the threat from the region to Britain, the Prime Minister’s spokesman said: ‘Those ungoverned spaces are spaces from which you can plot terrorist attacks on Europe.’

There are concerns that Islamic State fighters defeated in the coastal city of Sirte in Syria have fled to countries in the Sahel region, such as Mali.

Currently the only British support in Mali has been the use of a C17 Globemaster transport plane.

But now three CH-47 Chinooks will ‘provide a niche capability providing logistical support but also saving lives by avoiding the need to move troops by ground where they are more vulnerable to attack’.

A HMG spokesman said: ‘Recent terrorist attacks across Europe underline the scale of the cross-border challenge we face in keeping our citizens safe.

‘We will work together to deepen and enhance cooperation on law enforcement, security and criminal justice, to improve the safety of citizens across Europe and to strengthen our internal security capabilities.’

The two countries will also continue to strengthen their co-operation to ‘ensure that the internet cannot be used as a safe space for terrorists and criminals’.

The PM will also pledge £50m of humanitarian aid to save lives in African countries suffering conflict, epidemics and natural disasters. The Home Office will also help key partners in Africa to tackle immigration crime.

Mrs May and the President, who is making his first trip to the UK since winning last year’s election, are expected to have a private lunch before crunch talks at the officer training academy.

They will attend a reception at London’s Victoria and Albert Museum tonight.