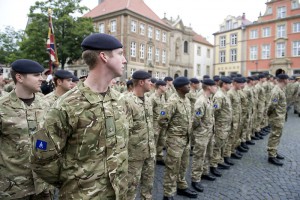 Britain is preparing to send a total of up to 370 peacekeepers to aid African Union and United Nations efforts in Somalia and South Sudan.

Prime Minister David Cameron will formally announce the new contributions Monday at a U.N. peacekeeping conference in New York hosted by Secretary-General Ban Ki-moon and U.S. President Barack Obama.  The U.N. expects 50 heads of state to attend and pledge additional troops to join the 125,00 peacekeepers operating around the world.

The British plan, which Cameron discussed with reporters Sunday, would include 70 military personnel going to Somalia to help with medical, engineering and logistics support for the AU mission there.  Britain would also send up to 300 troops over the course of several deployments to South Sudan for engineering support.

“We think Britain has a particular role in training and logistics and expertise and standards, so we want to step up what we are doing,” Cameron said.  “What happens in Somalia, if it’s a good outcome, it’s good for Britain.  It means less terrorism, less migration, less piracy.  Ditto South Sudan.”

Britain currently has about 290 peacekeepers deployed, according to U.N. data, nearly all of them as part of the U.N. mission in Cyprus.

The new troops will work with the 22,000-member African Union Mission in Somalia, which has battled the al-Qaida-linked Al-Shabab group alongside Somali troops.  Together in recent years they have reversed the militants’ momentum and reclaimed Somalia’s major cities, including Mogadishu.  But the group still controls rural areas and continues to carry out deadly attacks.

In South Sudan, Britain will support the more than 13,000 personnel working to protect civilians and help foster a regional effort to end the conflict that erupted in 2013 between forces loyal to President Salva Kiir and those loyal to former Vice President Riek Machar.